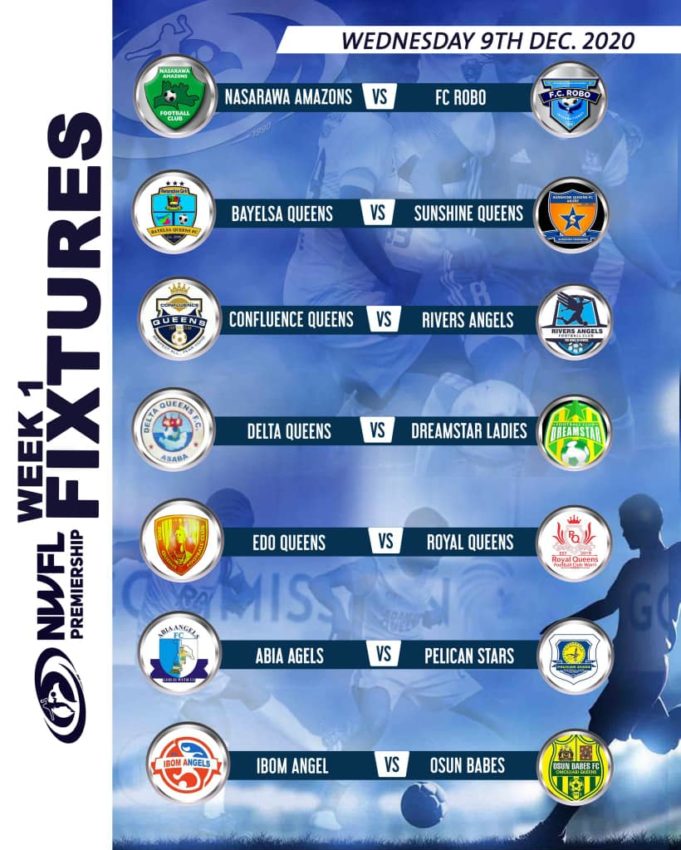 The NWFL Premiership returns on Wednesday, with 2017 Champions Nasarawa Amazons hosting Lagos based side FC-Robo in the league’s curtain-raiser with the ‘Safe Home Campaign’

Nasarawa Amazons had a difficult season last year and failed to make it to the super 4 for the first time in 7 years as Bayelsa Queens topped their Group.

Also on Wednesday, Bayelsa Queens will host Sunshine Queens at the Samson Siasia Stadium, in what promises to be one of the standout fixtures of the opening round, Osun Babes will be facing Ibom Angels in Uyo, Delta Queens against Dreamstar Ladies, Edo Queens up against Royal Queens in Benin, while Abia Angels will host Pelican Stars. Another interesting fixture to look forward to this mid-week is undoubtedly the game between Confluence Queens and Rivers Angels, where Whyte Ogbonda will be facing his boss Edwin Okon again after losing to him in the finals of 2019 Super 4 in Lagos.

www.thenwfl.com took a look at the seven opening games this mid-week and analysed each of the games.

Same fixture as that of the 2018 opening game. Both teams have a very similar style, playing from the back and holding a very high backline while pressing.

Nasarawa Amazons forward Chiemere Opara who is back after a long layoff from injury could be an important player upfront for the ‘Solid Babes’ , Amarachi Okoronkwo, Adejoke Ejalonibu are also both experienced and could play an important role in the game, while the trio of Monday Gift, Folashade Ijamilisu and Esther Oyenezide should be handy for the defence line of Nasarawa Amazons.

This should be one of the biggest opening matches of the NWFL Premiership. Wemimo Matthew and Moses Aduku are accomplished Managers in the Premiership and that will surely tell on the game.

Despite Bayelsa Queens recent victory at the Flying Officers Cup, Aduku still thinks his side have a great hurdle to cross in the league.

Joy Jerry, Anjor Mary, Vincent Precious are all rearing to go against a Sunshine Queens side who has Suliat Abideen, Iheoma Goodness and Innocent Patricia all in good form too. The Super Falcons coach will be looking to secure atleast a point in Yenagoa, which explains the fact that they will be going all out to score first before their host.

Osun Babes have a good record in Uyo, the Omoluabi Queens have only lost once in their last four meetings at the ‘Daakada’ State.

Both teams have beefed up their squad and will be aiming to pick favourable results when they battle in Uyo on wednesday.

New signing Juliet Bassey should play an important role, same with Uyime Johnson who joined back from Edo Queens.

Meanwhile, Osun Babes had a very difficult start to the season last time around and will be looking to start off better this time around. In-form forwards Yemisi Samuel, Kesiena Ojiwovyi, Yetunde Fajobi might give the “Orange Ladies” defence alot of problems too. We are in for an exciting encounter.

It is not the most heavyweight battle of the week, but Ann Chiejine would surely love to start on a winning note.

No doubt she has done something special at Abia Angels, since joining the ‘Angels from the East’ four seasons ago. The Super Falcons manager will be facing an experienced too in Edat Egan, who has a team that can cause problems for their host.

Abia Angels will be depending on Camerounian duo of Belong Michelle and Bakendj Reine, while striker Jane Abraham is also a player to watch out.

Delta Queens will be hosting Lagos based side Dreamstar Star Ladies at the Agbor Stadium, Delta State, in what promises to be highly engaging. Both teams lost key players last year and have surely signed new players to replace them. Coach Anya Ugochi technical prowess will be tested in Agbor on Wednesday evening, Anuoluwapo Salisu, Juliet Emereole and  Hambefen Ayatsea are players the ‘Galaticas’ will be relying on, while the host will be keying on Ajuyah Jennifer, Captain Ihuoma Onuegbu, Ijeh Eluemunor and others.

Rollandson Odeh will be expecting nothing but victory, when the ‘Obaseki Ladies’ faces Royal Queens on matchday one in Benin.

The two sides met at the Flying Officers Cup some weeks ago with the game ending 1-1.

Captain Fantastic Osas Igbinovia will be leading her team infront of their home fans for the first time in the league and the experienced midfielder will be hoping that the likes of Taibat Odueke, Jumoke Alani, Rebecca Ajimuda can live up and help defeat a youthful Royal Queens side which includes Osas Enoma, Chioma Oliseh, Vera Samuel and others.

The ‘Canadian Geese’ will be hoping to cause an upset in Benin. This is a game you wouldn’t want to miss!!

It’s going to be a big test for Whyte Ogbonda. His former side Rivers Angels will be thinking of picking a point or more at the Confluence Stadium on Wednesday.

Ogbonda is a manager who brings out the best in his players and will definitely do the same against Rivers Angels. Joy Omewa will be hoping to score goals against a side who desperately needed her services two years ago.

Christopher Precious will be playing at the Confluence Stadium for the first time since making a big money move to the ‘Jewels Of Rivers’.