Over this period of time, Nigeria have
scored 20 World Cup goals with 16
players finding the back of the net for
the Super Eagles.
However, only Daniel Amokachi,
Emmanuel Amunike and Kalu Uche are
the players who have scored two goals
at a World cup tournament.

1. USA 94’ Rashidi Yekini (Nigeria vs
Bulgaria)
Whoever deserved to score Nigeria’s
first goal at the World Cup must be a
player of pure talent and pedigree with
the national team and that was what the
late Rashidi Yekini had in him.
In Nigeria’s first ever World Cup match
against Bulgaria, the former Vitoria
Setubal striker had his usual eye for
goal and got on the score sheet
following a brilliant build up.
Daniel Amokachi set up a defence
splitting pass on the right to Finidi
George, who broke loose as the Ajax
winger made an intelligent run into the
box and gave the on rushing Yekini a
simple tap-in.

2. USA 94’ Daniel Amokachi (Nigeria vs
Bulgaria) and Daniel Amokachi USA
94’ (Nigeria vs Greece)
Yekini the goal scorer turned provider
for the Super Eagles second as the 28-
year-old skipped pass a defender and
launched in a cross which was
misjudged by a Bulgarian defender.
Amokachi was on hand to beat the
goalkeeper and score from an acute
angle to double the advantage for the
Eagles.
Amokachi’s second goal at the USA 94
World cup was a contender for one of
the goals of the tournament courtesy of
a brilliant individual effort from the
bull.
The former Everton striker improvised
with a brilliant turn in the midfield as
he took on four Greek defenders to the
cleaners.
He then unleashed a shot into an
impossible angle which found the back
of the net.

3. USA 94’ Emmanuel Amunike (Nigeria vs
Bulgaria) and Emmanuel Amunike USA
94’ (Nigeria vs Italy)
The Bulgarian did not know what hit
them at the first half of their match
against the Super Eagles as the Nigerian
team were already two goals up as
Emmanuel Amunike extended the lead
in the 55th minute.
Finidi delivered a delicious cross from
the right as the former Zamalek
forward ran into the box with a diving
header, giving the keeper no chance as
it ended 3-0.
After just 11 minutes against Italy in the
round of 16, Amunike scored his second
in the World Cup when a lucky pin ball
fell into his path as he buried the ball
with back facing Italian goal post.

4. USA 94’ Samson Siasia (Nigeria vs
Argentina)
It did not take time for the Clemens
Westerhof boys to go ahead against the
Diego Maradona captained Argentinian
side.
A little piece of dummy from Yekini set
up Samson Siasia who put the ball
between the defender’s legs before
looping the goalkeeper who was already
out of his lines to send the Boston crowd
into frenzy.

5. Finidi George USA 94’ (Nigeria vs Greece)
Finidi deservedly got his goal in the
tournament right before half time
against Greece when Amunike raced on
to a counter attack.
The former Rangers player passed the
ball to the arriving Ex-Calabar Rovers
man who was one-on-one with the
keeper before chipping the ball to score
a great team goal.

6. Mutiu Adepoju France 98’ (Nigeria vs
Spain)
The Super Eagles played with a tactical
side that was loaded with stars in best
league in the world as Fernando Hierro
put the Spaniards ahead with a deadly
taken free kick.
Mutiu Adepoju responded with his
trademark header when he neatly met a
cross from a corner kick taken by Finidi
George.
Mutiu Adepoju in action for Nigeria against
Spain.

8. Sunday Oliseh France 98’ (Nigeria vs
Spain)
With the score leveled at 2-2, Nigerians
back home seemed to be satisfied with
the result but the Super Eagles had other
ideas.
Sunday Oliseh’s bolt from the blue
broke the stubborn resistance from the
Spanish team as the ball blazed past the
goalkeeper to seal a hard fought victory.

9. Victor Ikpeba France 98’ (Nigeria vs
Bulgaria)
The Nigerian national team was
growing in confidence after the 3-2
victory over Spain as they met a
familiar foe, Bulgaria in the second
group match.
The Prince of Monaco scored a superb
goal after interchanging one touch
passes with Austin Okocha and Daniel
Amokachi as Ikpeba dribbled past
Ivanov to score from close range.
Nigeria vs Bulgaria, 1998 World Cup at
France. Nigeria won on a courtesy goal of
Victor Ikpeba in the 27th minute.

10. Wilson Oruma France 98’ (Nigeria vs
Paraguay)
Bora Milutinovic rested some of his key
players in the team which made way for
players on the bench to face Paraguay
after making it through the round of 16.
The South American nation went ahead
from a set piece as the ball was headed
home but Wilson Oruma restored parity
from a lucky rebound which bounced to
his path to slot the ball past Luis
Chilavert in goal.

11. Tijani Babangida France 98’ (Nigeria vs
Denmark)
Football pundits did not believe the
outcome of the match against Denmark
as the Super Eagles fell 1-4 to the
Eastern European nation.
The whirlwind gave the Super Eagles a
consolation after the team went four-
goals behind. A delightful cross from Jay
Jay Okocha found the Ajax winger as he
slammed the ball into the corner.
It was a disastrous outing for the
Adegboye Onigbinde’s team as the
Super Eagles crashed out of the
tournament in the first round scoring
just one goal in the competition.
perfect-inch cross from Joseph Yobo
from the right was well met with a
header from Julius Aghahowa to put
Nigeria ahead against the Swedes.

13. Kalu Uche South Africa 2010 (Nigeria vs
Greece) and Kalu Uche South Africa 2010
(Nigeria vs South Korea)
Nigeria lost the match 1-2 to the Greek
side who came from behind to score two
goals that gave them a vital victory for
progression into the next phase.
However, Kalu Uche’s earlier strike
from a set piece eluded everybody in
the box including the goalkeeper to put
Nigeria in the driving seat at
Bloemfontein.
Kalu Uche’s second goal of tournament
came in the next game against South
Korea.
Both teams were playing for pride after
failing to pick up points in their first
two matches as the Nigerian and
Koreans teams were heading home after
the match respectively.
Kalu Uche struck his second of the
tournament as he lashed on to Chidi
Odiah’s teasing cross from the right to
give the Super Eagles the advantage.

14. Yakubu Aiyegbeni South Africa 2010
(Nigeria vs Korea)
The Koreans were ahead by 2-1 and
Nigeria could not afford to lose their
final group game as Lars Lagerback’s
men wrestled themselves back into the
match.
Yakubu scored from the spot after
Chinedu Obasi was brought down as the
Everton man slotted the ball home
calmly to make it 2-2.
He went on to miss a sitter in the dying
minutes of the game which could have
given Nigeria the victory.
This is legendary miss by Yakubu
Aiyegbeni in 2010 that turned his football
career south and change the whole South
Korea economy for good.

15. Ahmed Musa Brazil 2014 (Nigeria vs
Argentina) two goals
The blockbuster match against the
Argentines produced fireworks,
although Nigeria lost 2-3 in the
encounter, Ahmed Musa scored two
world class goals.
A minute after Lionel Messi put the Blue
and White stripes ahead Ahmed Musa
responded with a cracker as he created
space for himself inside the box to bury
the ball in the corner.
But some minutes later it was 2-1 in
favour of Argentina courtesy of another
Lionel Messi inspired goal. However,
right from the restart of the second half,
Musa broke through the defence again
after a flick from Emenike as the
former Kano Pillars winger sent the
keeper the wrong way to even the
scores.

16. Peter Odemwingie Brazil 2014 (Nigeria
vs Bosnia)
After losing the first match to Argentina
it was a must win for the Super Eagles
in the match against Bosnia and they
got the result.
Peter Odewingie who has been out of
the national team for a year scored the
only goal of the match courtesy of a
resilient Emmanuel Emenike’s assist.
Peter Odemwingie celebrating his goal against
Bosnia at Brazil 2014 World cup
The former Fenerbache striker made a
strong run down the right as he
wrestled his way past the Bosnian
captain before setting up the former
Stoke City forward who hit the ball first
time to beat Begovic in goal. 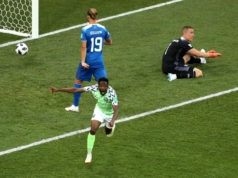