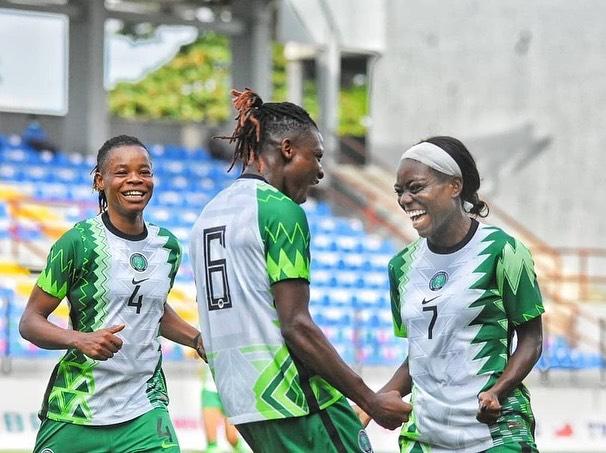 Nigeria started the game brightly, consequently going ahead in the 20th minute through Uchenna Kanu after a clever play from Francisca Ordega who showed good footwork to pinpoint the ball to the Sweden based forward from the right flank.

The Falcons continued to pile pressure on their opponent as they searched for the much needed second goal.

Six minutes after conceding the first goal, the Ghanaian defenders left too much space for Ogbonna Glory to drive in and forced a save from Fafa Dumehasi.

From the resulting corner, Uchenna makes it two for the Falcons by leaping to get to the end of Onome Ebi’s rifling delivery.

Nigeria will travel to Ghana for the return leg that takes place on Sunday, 24 October 2021 at Accra Sports Stadium, Accra.

The AWCON tournament will take place from July 2-23rd 2022 in Morocco and will also doubles as the African qualifiers to the expanded 2023 FIFA Women’s World Cup.

The top four teams will qualify for the World Cup in Australia and New Zealand, and two more teams will advance to the inter-confederation play-offs.

Nigeria are the three-time defending champions, having won the tournament in 2014, 2016 and 2018. The 2020 edition, which would have been the first to feature twelve teams, was cancelled due to the COVID-19 pandemic.

Nigeria is the most successful nation in the tournament’s history, having won a record 10 titles, meaning they have won all but two of the previous tournaments and has qualified for all editions.