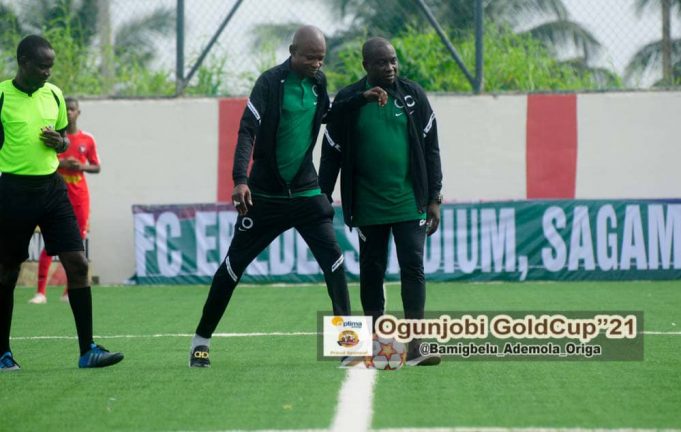 Nigeria Football Federation(NFF) Executive Member and Chairman Technical and Development Committee, Ahmed Yusuf Fresh have given credits to the organizers of the Ogunjobi Gold Cup for using two stadia for its pre-season tournament.

The prestigious tourney which is in its 9th edition is been co-hosted at the Remo Stars Stadium in Ikene and FC Ebedei Stadium in Sagamu, both in Ogun State.

Fresh who performed the official kick-off to set the tone of the Ogunjobi Gold Cup said, “The pre-season tournament has a name attached to it. Late Ogunjobi was a father figure in Nigeria’s football, and glad we have used the pre-season to honour him.

“Marvelled at the level of works done at the FC Ebedei Stadium and a big kudos to Barrister Churchill Oliseh for this multi-million naira project.

“This is what we want to see in our leagues across the three divisions, big applause to FC Ebedei President. If a Nationwide League One (NLO) team can have a FIFA /CAF certified stadium like this why not the over 350 clubs in the third-tier league and even the NNL and NPFL teams.

“I want to also commend the General Coordinator Tunde Shamsudeen and his team for maintaining the standard of the tourney and also thinking within the box to be the first organizers to use two stadia to host its pre-season.

“The use of Remo Stadium and FC Ebedei Stadium for the Ogunjobi Gold Cup is for the benefit of the fans who are passionate about football.”

Fresh, further said that he could grace the final on Saturday October 30, 2021 at the Remo Stars Stadium, Ikene.

“The 9th edition won’t be an exception, an assuring that if time permits I should be at the closing ceremony.”

The future will determine my stay in Eagles’ camp – Mikel

I want to play in Chelsea- Ghanian star