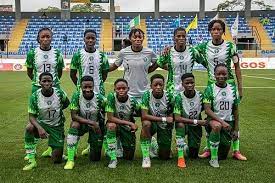 The Nigeria Football Federation says it will consciously invest even more in the women’s game as the three women National Teams continue to churn out impressive results internationally.

General Secretary, Dr Mohammed Sanusi on Tuesday applauded the efforts of the Super Falcons in the second of their two-match tour of Canada, in which they were held to a 2-2 draw by Olympic champions Canada at the Starlight Stadium in Langford, Victoria City. The match fell in the early hours of Tuesday in Nigeria.

“The NFF is very much impressed by the performance of the Super Falcons against Canada, not only in the second match, but also in the first match despite that they lost 0-2. That first match in Vancouver was played only a day after most of the players arrived in Canada due to delays in issuance of visa, and after long-haul flights. To battle the Olympic champions the way they did in their second game means we now have a team that can challenge the best teams in the world competitively on a good day.

“This is a very encouraging result and the NFF will not rest on its oars but will continue to invest even more in women’s football. The U20 girls, Falconets have recently qualified for the FIFA U20 World Cup after four rounds of qualifying matches, and the Flamingos are also in hot chase for a ticket to the FIFA U17 Women’s World Cup in India.”

The Super Falcons battled the Canadians with zest and confidence in the early hours of Tuesday, with US –based Ifeoma Onumonu, who scored both goals when the Falcons defeated their Ivorian counterparts in the first leg of their Women AFCON final qualifying round in Abuja two months ago, getting on the secoresheet as early as the 5th minute. The first half ended 1-0 in favour of the African champions.

Veteran Christie Sinclair pulled Canada level four minutes after the restart, but Spain –based playmaker Rasheedat Ajibade, who was remarkable in the first game, shot Nigeria in front once more in the 53rd minute. Shelina Zardosky pulled Canada level with two minutes left on the clock.

The NFF has revealed plans to have the Super Falcons camp in Morocco ahead of their participation in the 12th Women Africa Cup of Nations, taking place 2nd – 23rd July. The championship also serves as Africa’s qualifying tournament for the 2023 FIFA Women’s World Cup, with all four semi finalists earning tickets to the event in Australia/New Zealand, which will be the first 32-team FIFA Women’s World Cup finals in history.

I want to play Nigeria in Russia – Messi