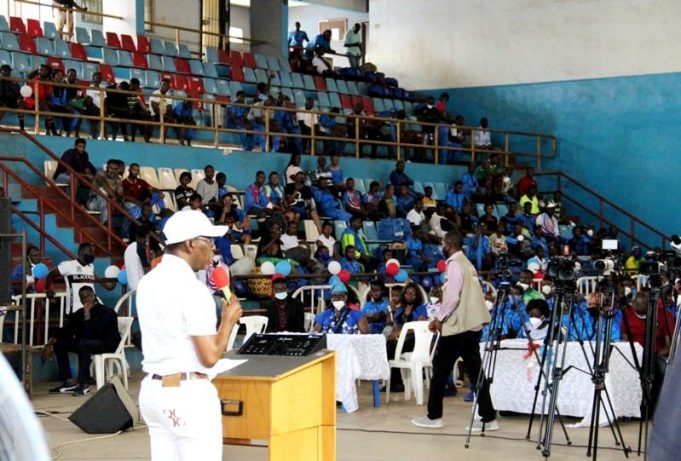 Governor Ifeanyi Okowa of Delta on Friday assured the state’s contingent to the 20th National Sports Festival holding in Edo from April 2, that every gold medal won at the festival would attract N1 million reward.

The governor made the announcement at a pre-departure prayer session for the contingent at the Stephen Keshi Stadium, Asaba, and restated that the state would continue to reward deserving athletes.

He reaffirmed that the reward would be a repeat of what the athletes received for medals won at the 19th edition of the festival held in Abuja.

He said that each silver medal won attracted N500,000 to the athlete while winners of bronze medals received N250,000 for each medal.

He charged Delta Sports Commission to ensure that members of the team received the best of comfort at the games, adding that the team should avoid any negative incident in Edo.

“In the last several months, you have gone through trying times that will bring discouragement.
“But at last, we give God the glory because the 20th National Sports Festival will begin today.

“The COVID-19 pandemic has affected all plans, including the economy of the nation and even sports have been badly affected but we thank God that the National Sports Festival is finally taking off.

“In the last sports festival, the athletes made us very proud as a state, because we were very emphatic in our victory and we didn’t just have victory we actually dominated the games.

“It appeared that we didn’t have any competitors and I know, as you go to Benin, you must be vigilant and committed with the passion to re-enact our victory in Abuja 2019.

“The ability to win starts from the inside and you must be passionate about it and you must dream it for it to become a reality.

“We are not afraid of the numbers that will win, because as many athletes that win shall receive their cash rewards,” he said.

On the inability of the foreign athletes to attend the festival, the governor said that God used the opportunity to showcase budding talents.

He urged the athletes to pray and work hard, adding that God would renew their strength and give them the needed energy to excel.

“Go forth to Edo State to win and to dominate the National Sports Festival.

“Many states have been preparing to displace you but I am convinced that this cup will return to Delta State because I know the grace of God is with you all.

“We have continuously won the festival and I know that we will continue to win, and I want to urge you to be confident in yourself and believe in God to lead you to victory,” Okowa said.

He assured that the contingent would win the games because of the support and encouragement of Gov. Okowa to the athletes.

“It is time to go to Benin City for the 20th National Sports Festival that has suffered several postponements, but thanks God we are now ready to go.

“The athletes have suffered so much psychologically, but I know that they are in high spirit and they are well motivated enough to make us proud.

“This time, due to the several postponements, most of our foreign athletes could not make it because they have qualified to go to the Olympics. In spite of that, Delta will still parade good athletes that will challenge for medals because you have always encouraged us and you have given us all that we need to go and perform well,” the chairman said.