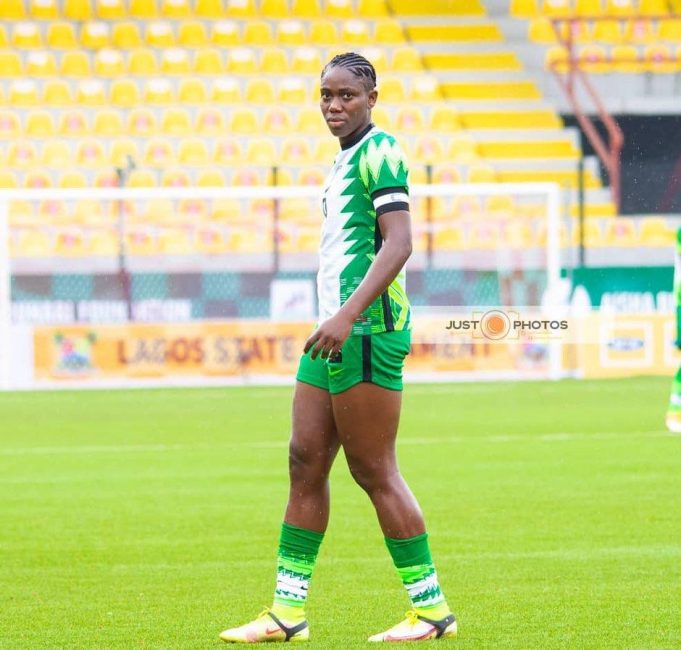 Nigeria’s striker Asisat Oshoala remained unconcerned by her recent barren run of form in front of goal as she led the team to a comfortable win over Ghana on Wednesday.

Nairasports reported that Uchenna Kanu scored a first-half brace to hand Nigeria a 2-0 win against the Black Queens in the first leg of their 2022 African Women’s Nations Cup qualifiers at the Mobolaji Johnson Arena.

Though, the FC Barcelona Femini striker is in red-hot form leading the Spanish league as the joint top scorer after scoring nine goals in her eight matches so far for the European champions in the 2021-22 campaign but she has been enduring a dry spell in front of goal for her country.

Since her goal against Ivory Coast in October 2019, Oshoala has made eight appearances for the Falcons and managed to score in just one during the two Covid-induced years. Albeit, she has played a pivotal role in some of those games, prominently against Mali when she assisted all the two goals in the game.

Talking to Nairasports, she maintains her lack of goals is not a priority and it doesn’t take the threat element off her, assuring that the main task ahead is to lead the team to the 2022 AWCON tournament.

“Personally, I don’t have a problem with scoring goals but at the end of the day when you don’t get to score, you create for others and that’s the mentality of a champion.

“I’ve scored a lot of goals, won a lot of top scorers so I’m not bothered about goals. It’s about the team, not me at the moment. The responsibility I have is to make sure I take this team to the African Women’s Cup of Nations and that’s my objective.”

The first and only African winner of the European Women’s Champions League also commends the efforts of her teammates while seeking for more improvement from the technical team.

“We are really happy as a team, wonderful all round performance from the goalkeeper to the striker to the players on the bench as well. That was a great mentality and it was a good one. Good fight out there today, kudos to the girls.

“Coming from the friendly game against South Africa to win 2-0, the team wants to go to Ghana to try to win as well,” said Oshoala. “There are a lot of things we can improve on obviously but it’s a technical thing, when the coaches sits together, they know what and what they want and we’ll definitely work on it.”

Nigeria will travel to Ghana for the return leg that takes place on Sunday, 24 October 2021 at Accra Sports Stadium, Accra.

The AWCON tournament will take place from July 2-23rd 2022 in Morocco and will also doubles as the African qualifiers to the expanded 2023 FIFA Women’s World Cup.