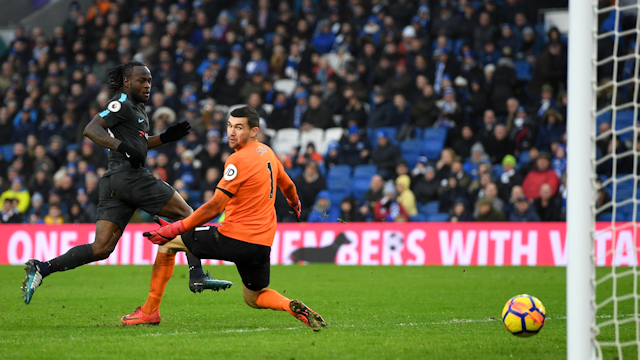 Victor Moses was impressed with the attitude Chelsea showed against Brighton and the wing-back was delighted to score his first Premier League goal of the season in our comprehensive 4-0 win.

Two goals inside the opening six minutes put us well in control against the Seagulls, with Eden Hazard giving us the lead after just three minutes, before the second was finished emphatically by Willian after a stunning team build-up.

Moses. ‘Getting the two goals early on really helped us and we showed great character. It was very important to get the three points.

‘We’ve been working so hard in training, obviously on our finishing as well, and you could see that on the pitch – everybody did really well to put the ball in the net and we’re very pleased. We also defended very well from front to back.

‘Once we got those two goals we wanted to control the game, which we did. We’re very pleased and now we’re looking forward to Wednesday’s game.’

Reflecting on Willian ’s effort and

Hazard ’s display, he added: ‘It was very good and showed how good we are when counter-attacking. Eden was on fire. He showed that, on his day, he’s probably one of the best in the world and we’re very pleased for him. It was a good win for us.’

Moses put the seal on a fine victory in the dying stages, latching onto a sublime throughball from substitute

Charly Musonda before finishing with aplomb.

‘It’s about time,’ he said, having scored his first club goal since finding the back of the net in the Community Shield last August. ‘I was due one and I’m very pleased to get on the scoresheet. It’s important to me and I want to keep on helping the team, working hard and hopefully score more goals in the future.’

Valuejet Para table tennis will be used to prepare players for Tokyo 2020, NTTF...