Manchester City’s dramatic 2-1 win over Southampton on Wednesday restored their eight-point lead at the Premier League summit and
further enhanced their status as overwhelming title favourites.

Pep Guardiola’s sparkling team have smashed record after record since the start of the season
and are currently on a 19-game winning streak in all competitions.

But how do they match up against teams who
have made similarly impressive starts to a Premier League campaign?
Premier League record after 14 games: W10 D4
L0 F28 A10 Pts 34
One of the most feted teams in the history of English football, Arsene Wenger’s ‘Invincibles’ became the first side since Preston North End in
1889 to complete a top-flight season unbeaten.

After 14 games of the 2003-04 campaign Arsenal were actually second in the table behind
Chelsea, who had flown out of the blocks under Claudio Ranieri. But Chelsea wilted during the
English winter, winning only three of their next eight games, and Arsenal, inspired by Thierry Henry, stormed past to glory.

Premier League record after 14 games: W12 D1
L1 F33 A7 Pts 37
Chelsea took England by storm in Jose Mourinho’s first season as manager in 2004-05, finishing 12 points clear of Arsenal at the top of
the table, and they picked up where they had left off the following campaign. Mourinho’s men won
their first nine games and although Manchester United beat them 1-0 in early November, Chelsea
were 10 points above them — having played a game more — after 14 matches.

Chelsea responded to the defeat against United with a
salvo of 10 successive wins and finished eight points clear at the top despite losing their last two matches.

Premier League record after 14 games: W11 D2
L1 F30 A7 Pts 35
Having been left for dead by Chelsea in the previous campaign, there were few expectations
United would become front-runners, but Alex Ferguson’s side took the title race by the scruff of the neck with 11 wins in their first 14 games.

United’s early-season form showcased the nascent partnership between Wayne Rooney and
Cristiano Ronaldo, whose goals would fire the club to three successive Premier League titles
and Champions League glory in 2008. United finished the 2006-07 season six points clear of
Chelsea, who suffered the indignity of having to offer their rivals a guard of honour when they hosted Ferguson’s men on the season’s
penultimate weekend.

Premier League record after 14 games: W12 D2
L0 F48 A13 Pts 38
The only team to have outscored Guardiola’s City at this stage of a Premier League season, Roberto Mancini’s side made a blistering start to the campaign, averaging 3.43 goals per game in
their first 14 matches.

The centrepiece of that
run was a seismic 6-1 victory away to defending champions Manchester United in the October,
which was their derby foes’ worst home defeat since February 1955. It left City five points clear of United at the top of the table, but a spring
surge by United took the title race right to the wire.

Premier League record after 14 games: W13 D1
L0 F44 A9 Pts 40 Guardiola’s City care the first Premier League
team to have amassed 40 points in their first 14 games, their sparkling sequence of victories featuring a 6-0 win at Watford, a 7-2 annihilation of Watford and 5-0 thrashings of Liverpool and
Crystal Palace. Spearheaded by Raheem Sterling,Sergio Aguero, Gabriel Jesus and Leroy Sane,
they have not dropped points since a 1-1 draw with Everton on August 21. Eight points clear of
Manchester United, the title seems to beckon and if they win their next two games — at home to West Ham United and away to Manchester
United — they will set a new record for successive victories within the same English top-flight campaign. 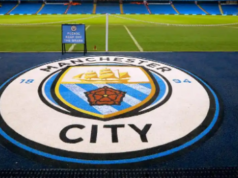 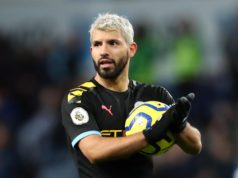 ​Three things we learned from day one at the World Cup