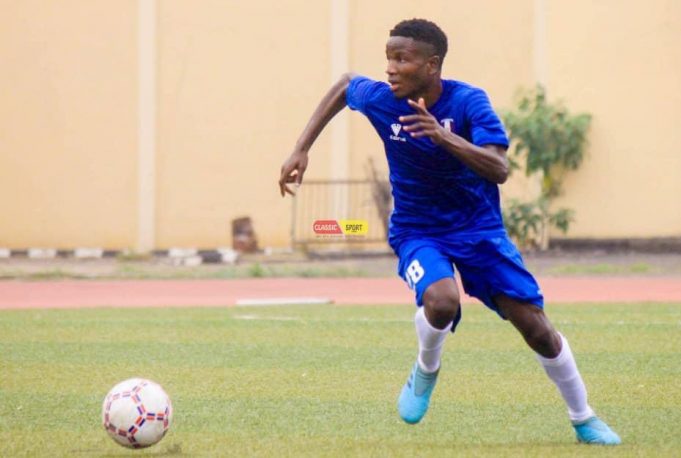 For a very talented player, who first played for a grassroot football club named Progressive FC In Omi-Adio and later Accurate Stars football club, Apata, Ibadan and joined VIA Football Academy in 2016, Malomo Taofeek Ayodeji for his love of football left for Lagos to continue his football career.

In Lagos he moved to YSM Academy (still the property of VIA Football Academy) under the guide of coach Obafemi, and as soon as Obafemi became the coach of Joy Cometh, he took Malomo with him.

“We would like to have Ogunniyi Omojesu join us at Shooting Stars”, was the first request made by the General Manager of 3SC, Rashid Balogun to Bayo Adigun, who also represents Omojesu Ogunniyi.

However, with Omojesu playing for Sunshine Stars then in the NPFL, the request was turned down after 3SC GM spoke with the player representative, Bayo Adigun who in turn offered Malomo Taofeek to the Oluyole Warriors.

In a friendly game between VIA Football Academy and MFM FC at Prayer City, the head coach of 3SC, Edith Agoye and Kabiru Alausa came around to see the game.

As soon as the game ended, Shooting Stars requested for Malomo’s number which was first declined by the General Manager of VIA Academy, Babayemi Akintomiwa but later given out to Shooting Stars.

Bayo Adigun, the player rep had a lengthy talk with the GM of 3SC, and told him that Malomo is with Joy Cometh where he was being owed over 7 months salary which was duly confirmed by Joy Cometh and it would take a process to get the clearance of the player from the NFF.

While the process was ongoing, Shooting Stars had moved behind the scene to get Malomo Ayodeji clearance in what was obviously a DUBIOUS clearance as a release from NFF shows that Malomo was no longer a player of Joy Cometh and it was impossible, he gets cleared there and even without the notice of the said player, Malomo Taofeek Ayodeji.

Except the league license in which Malomo signed for 3SC, the club had never given him a contract to sign which shows their claim to have outrightly gotten him from Joy Cometh FC remains dubious unless they can provide the contract papers.

Meanwhile, 3SC claim not to know anything about a player representative of Malomo, despite negotiating the salary scale of Malomo with his agent, Bayo Adigun. The question now is, how come you no longer know any agent of Malomo despite discussing his salary with the said agent.

While VIA Football Academy insist that the player is their product, they maintained that he was not signed from VIA Football Academy to any club and remains a free agent player following his situation with Joy Cometh FC and the NFF issuing an order and a confirmation to that.

It is indeed surprising that a traditional club like Shooting Stars football club of Ibadan could be caught up in such a player mess as this as it is understood that this isn’t the first time 3SC would be in this kind of saga as one would quickly recall the issues they had with Sunday Faleye.

All of the documents as regards this issue are available, dating back to the mails from the NFF to Joy Cometh FC and the request letter clearance with the NFF making the decision.

Congratulations to Shooting Stars on their NPFL promotion but it’s high time they allowed a player who helped them secure top flight football promotion continue his development.