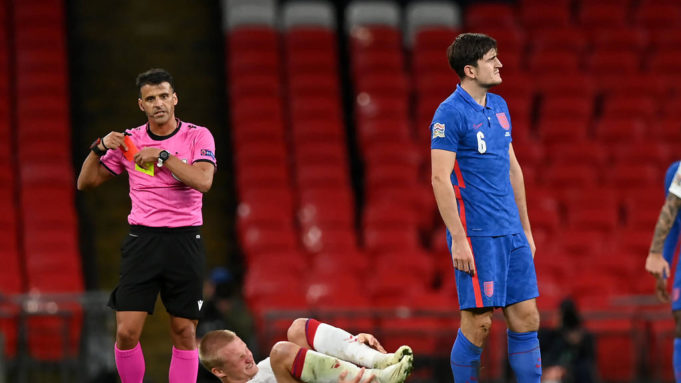 Harry Maguire’s wretched season hit a new low as the England defender was sent off before Christian Eriksen’s contentious penalty gave Denmark a 1-0 win in the Nations League on Wednesday.

Eriksen’s goal came just minutes after Maguire’s dismissal for two needless first half bookings and condemned Gareth Southgate’s side to their first defeat in 12 months.

Maguire was the third England player to be sent off at Wembley after Paul Scholes in 1999 and Steven Gerrard in 2012.

And adding to Southgate’s mounting discipline problems, Reece James was shown a red card after confronting the referee following the final whistle.

It was the latest blow in a troubled start to the campaign for Maguire, who has been in woeful form for Manchester United since his involvement in a brawl on the Greek island of Mykonos in August.

Maguire was given a suspended sentence of 21 months and 10 days in prison after being found guilty of repeated bodily harm, attempted bribery, violence against public employees and insult.

The conviction was nullified after he appealed, but the 27-year-old had only returned to the England squad for the current internationals after being dropped for their previous games following the incident.

Maguire might not be the only one who loses his place in Southgate’s team after this lacklustre performance.

England came from behind to hand top ranked Belgium their first defeat since 2018 on Sunday, building on last week’s friendly win against Wales.

But Southgate had urged his team to show they can maintain the consistency required of elite teams and this was an underwhelming response.

England are now third in Nations League Group A2, behind both Belgium and Denmark.

Southgate was accused of being two conservative with his tactics after England were held to a dreary 0-0 draw by Denmark in Copenhagen last month.

Once again, Southgate picked two holding midfielders and three centre-backs and left out Jack Grealish despite calls for the in-form Aston Villa winger to start.

Maguire’s disastrous evening offered a ready-made excuse for England’s limp performance, but the cautious formation played a role in their first loss since the Czech Republic beat them in October 2019.

Foreshadowing his impending dismissal, Maguire was fortunate to escape with only a booking for a nasty foul on Yussuf Poulsen in the opening moments.

Eriksen nearly set up an early goal for Denmark when his near-post corner was poked just wide by Kasper Dolberg.

Maguire appeared to strain a hamstring when he slipped awkwardly while making a challenge and although he played on his match came to a premature conclusion in the 32nd minute.

Sliding into a needless challenge on Dolberg, Maguire got a touch on the ball but his tackle sent the Dane flying and referee Jesus Gil immediately showed him a second yellow card.

England suffered another blow two minutes later when Kyle Walker made a hash of dealing with a ball into the penalty area.

Distracted by keeper Jordan Pickford rushing off his line in a misguided attempt to help, Walker tugged at Thomas Delaney just enough to persuade Gil to award a soft penalty that Eriksen converted with ease.

It was the perfect way for Inter Milan midfielder Eriksen to celebrate his 100th cap for Denmark.

England captain Harry Kane started after coming off the bench against Belgium despite dealing with what Southgate described as “muscle fatigue”.

Kane’s inclusion risked angering Tottenham boss Jose Mourinho and there was a definite lack of sharpness about the striker.

Mason Mount had England’s best chance to equalise when his header was brilliantly pushed away by Kasper Schmeichel.

James, making his first England start, drew a fine save from Schmeichel with a second half free-kick.

But the Chelsea right-back tarnished his lively performance when he was sent off in a tawdry coda to a frustrating evening.