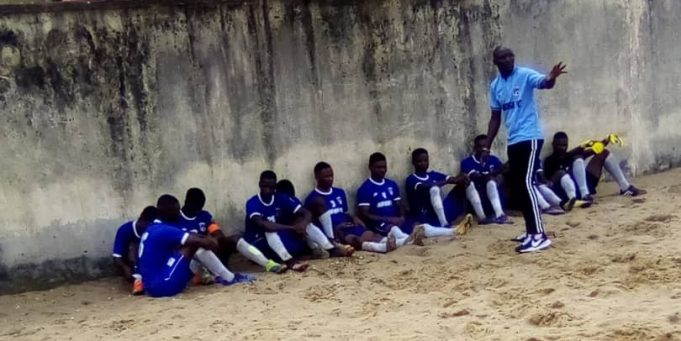 Ahead of the commencement of the Nigeria Nationwide League (NNLO), Nigeria’s third tier football league, Madiba FC coach, Kushimo Adeolu has put their opponents on alert, asserting that his team are ready for the new season.

The coach made the statement of intent after the team’s training in which the players were put through their paces and were made to train with the ball at their feet.

While speaking to NAIRA SPORTS, Coach Kushimo said, “The team is fully ready. We have been doing well in recent games and we have played great football. We don’t have any weaknesses to work on because everyone is prepared and the boys are raring to go.”

“Yes, we don’t have any weaknesses because everyone has been working on their weaknesses in training over the past year. we always work on the training ground and we barely go on any breaks.”

Coach Kushimo also singled out some players for praise, lauding their performances and their contributions and improvements in the team. He said, “We have quality players in the team. Ola (Ojetunde) is a good player and a fantastic striker that brings the players into the game. Adeyemi Mayowa is also a fantastic footballer while Shola and Ogo Oluwa are great team players. All the players are important to the team and this is an exciting group with immense quality and potentials.”

The team’s goalkeeper trainer, Solomon Ganaje also added that the team is mentally and physically ready for the new season.

“You can see through the sessions that the team is well prepared. The gospel truth is that this team will go far. When we start the amateur league, you will see the best from us because we are prepared and we are still training hard.”

Players to Watch from MADIBA

Some players caught the eye with some scintillating performances in training under harsh heat condition.

Here is a look at Madiba FC’s most promising players ahead of the new NNL season.

The dimunitive midfielder had enjoyed the training session yesterday, pulling the strings from the middle of the training park and tracking back to help the team whenever he was asked to.
Adeyemi, like any other grassroot player dreams of playing at a professional level.

” My aim is to play at a professional level. This is the dream of every grassroots players. To achieve this, I do a lot of personal training because it’s not easy to play among men. I want to assist my team with goals, assists, creating chances and marking for my team.

Everyone at training pitch in Oshodi yesterday stood in awe when Shola curled a wordie goal into the top right corner during training yesterday.

He demonstrated loads of energy when he intercepted his opponents, escaped two challenges and curled a beautiful shot into the far corner yesterday afternoon.
Speaking after the training session, he said.
“After pressing for the ball and winning it back, the only thought I had was to shoot the ball into the top corner and I got the goal. I train alone to perfect this particular move and thank God it paid dividends today.”

Despite the goal being scored in a training session, you could tell just how much it meant to him through his passionate celebration.

Olaoluwa has been endorsed by the coaches as one to watch out for in the upcoming season.
He’s the kind of striker that perpetually tries to outrun the opposition’s defence line and loves to run into spaces to receive passes from midfielders and score goals.
While speaking to Nairasports, Ola mentioned that he likes to be the striker “his team is proud of.”

All Is Set For 2021 Remo Mini Sports Festival