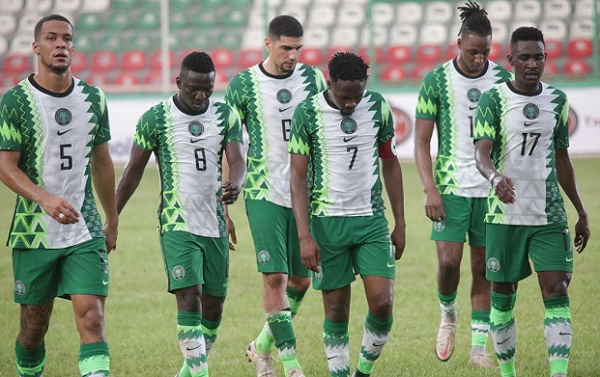 The super Eagles of Nigeria will decide their world cup fate with the Lone stars of Liberia at Tangier, Morocco today, Saturday, 13th, November, 2021 in there final away games for the Qatar 2022, world cup group C qualifiers.

The Eagles who have Six points in four games, with four goals and conceded just once, will seek to continue the form outside the shores of Lagos.

After the dramatic comeback against Cape Verde at the 5000- capacity Estádio Municipal Adérito Sena, where Victor Osimhen’s strike in the 30th minutes and Kenny Santos’ own goal in the 78th displaced the blue sharks at home to Eagles.

Despite facing defeat at the Teslim Balogun Stadium to Central African Republic with Karl Namnganda stoppage time goal to break 20 years r unbeaten record at the refuge of the three time African champions.

Even with the defeat in Lagos, Gernot Rohr’s men recorded another away victory over CAR in Duola, Cameroon few days after to stay top of group C with 9 points.

As it is, Eagles have perfected records against Liberia and in away matches so far in the qualification fixtures.

The fate of Gernot Rohr’s men will be decided today and the return leg in Lagos on Tuesday for Qatar 2022 world cup.

Although, Ahmed Musa, Captain of the Super Eagles has assured that maximum points will be recorded during their tie with the lone stars of Liberia today but what matters is the coordination of the team ahead of the game.

All eyes will be on Eagles with the recent addition of Odion Ighalo at the attacking role to boost Rohr’s goal scoring chances.

Meanwhile, the gaffer have placed experience over skill in front of goal without leaving injured players like Chukwueze, Iwobi and Ndidi back to full action. Nothing seems difficult for the Franco-German to earn qualification today at Tangier.

Genohr Rohr has already approved their present location to be perfect for the boys which means lesser excuses if things go sideways today.