Cyril Chinedu Olisema was the hero for Enyimba as the Aba Elephants needed a 95th-minute winner to claim a 1-0 victory over Orlando Pirates which powered them to the next round of the CAF Confederations Cup.

The Aba Elephants knew before kickoff at the Enyimba Stadium in Aba on Wednesday night that only a win would be enough to book their place in the competition’s quarterfinals.

Still, Fatai Osho’s men produced a lame showing against their South African opponents and needed a late effort from their number 20 to secure the all-important three points at stake.

The Nigerian giants were always going to miss the inspiring influence of suspended skipper Austin Oladapo against the undefeated Buccaneers.

But none of those exciting forwards could breach the visitors’ defence during the 90 minutes, as the encounter limped towards a stalemate.

But the hosts came alive in the closing stages as Anayo first whistled a header narrowly wide moments after which an Omoyele goal was ruled out for an inside.

And with just seconds left of the six added minutes, Olisema popped up in the opponent’s danger area to send an effort beyond the reach of goalkeeper Sandilands.

At one point, Enyimba looked like they would finish bottom of Group A with ES Setif beating Al-Ahli Benghazi in Algeria.

But that slim victory catapults the People’s Elephants to the top of the group, with Orlando Pirates joining them as the other qualifier. 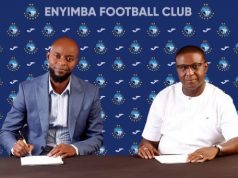 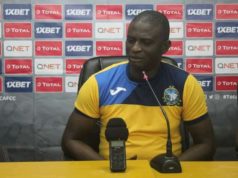