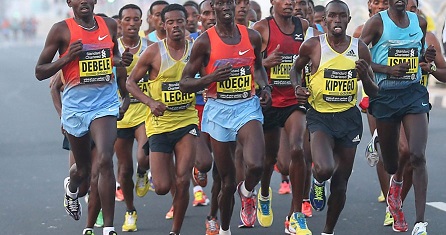 The 2018 edition of the Access Bank Lagos City
Marathon looks set to beat the attendance
record of the 2016 and 2017 editions as over
50,000 runners have signified their intention to
compete in the race slated for February 10, 2018,
by collecting the race forms.
In 2016, over 50, 0000 runners participated while
73,000 competed in the 2017 edition; organizers
are anticipating between 100,000 to 120,000
runners for the 2018 edition.
There are many new attractions making
thousands throng the Teslim Balogun Stadium
Marathon Office and Access Bank branches
nationwide to collect forms for this edition.
The marathon route has been certified by
athletics and road races governing body IAAF/
AIMS. The route was certified by Norris
Williamson, a grade A measurer, who measured
the marathon route for the Atlanta, Athens and
Beijing Olympic games and several other
marathons and road races.
The Access Bank Lagos City Marathon is now an
IAAF Bronze Labelled Road Race, therefore, any
athlete who competes in the race and returns a
world-class time becomes a Bronze Label runner.
Apart from the above, the prize money for
Nigerian participants in the race has received a
remarkable boost.
While they have the opportunity to win the
general prize money with other nationals, there is
the exclusive Nigerian winner prize money, which
is now increased to N3 million from N1 million.
The race Official Automobile Partner is also
giving away two cars, to the first male and
female Nigeria runners to cross the finish line, in
the 10-kilometre race.
General Manager of the Access Bank Lagos City
Marathon, Yusuf Alli clarifies that Nigeria in the
10-kilometer race refers to all residents of
Nigeria.
“A British, Chinese, Egyptian or another other
national of the over two hundred countries in the
world who live in Nigeria, work and pay tax in
Nigeria is eligible to win the cars like any other
Nigerian but foreigners or Nigerians resident
abroad who came just for the marathon are not
eligible, it’s strictly for Nigerian residents.’’ He
said.
Facebook Comments Box 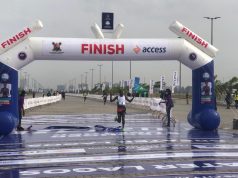 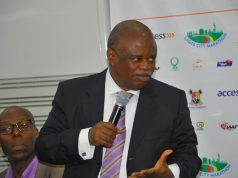