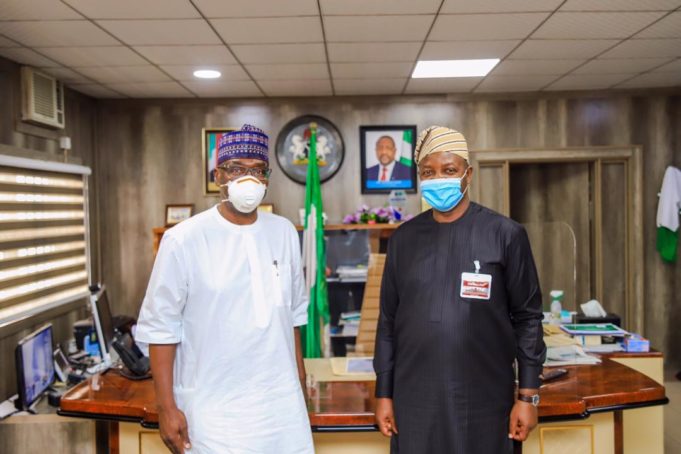 With an ongoing N1.3 billion investment in youth hubs, the Kwara State Governor AbdulRahman AbdulRazaq has expressed the readiness of his state to partner with the Ministry of Youth and Sports Development for the training of its youth and to facilitate their benefitting from the National Youth Investment Fund, NYIF.

Governor AbdulRazaq gave the assurance during a visit to the Minister of Youth and Sports Development, Mr Sunday Dare at his Office in Abuja on Thursday.

The Minister of Youth and Sports Development, Mr Sunday Dare expressed the Ministry’s readiness to work with Kwara state and other states of the federation that have the infrastructure to support the training of youth.

He said, “We will be rolling out our Economic Sustainability Plan, which is heavy on digital skills training. We are going to do it state by state, geo-political region by geo-political region. Once it is fully developed, before it is rolled out, we will want you to give us a go-to person when it comes to youth development.

“We are also planning to do coding, we want to do it in a state in each of the geo-political zones but there is a pre-condition, we are looking for states that already have a building with about two hundred computers ready and then we will bring the resource persons, they will train and then after training provide laptops with all the necessary software as a takeaway because that is the tool they will use.

“For north central, we hope that Kwara will have such a hub. In another 20 to 25 days we should be starting that and those that would be trained would be those around the region and Kwara would coordinate that for us. The plans you have about training I think they are good; we would let you know about our training plans because we are positioned to train one million in the next two and half years, it is already in our plans,” the Minister explained.

Facts about Ronaldo and Messi