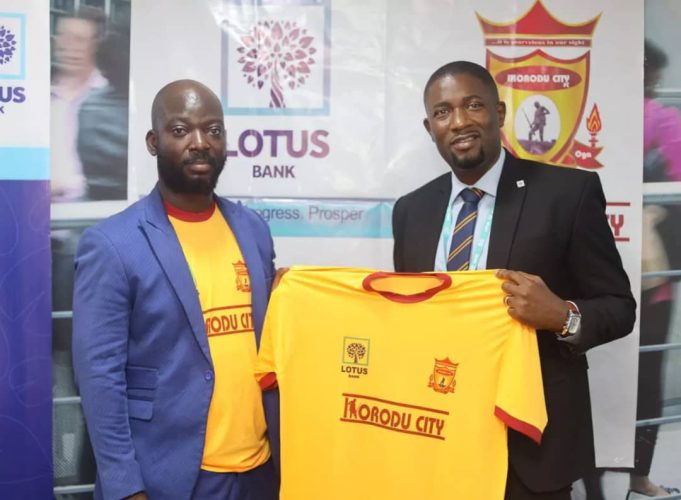 The Bank has become the community club sponsor and will feature on Ikorodu City FC home and away jerseys, training, and match pitch panels. They will also feature in all Ikorodu City FC community programs and media activation.

Lotus Bank’s Chief Financial Officer, Tunde Lawal, who represented the Banks’ MD/CEO, Kafilat Araoye said; “This partnership is a long-term agreement and we thank you for what you have done so far. In terms of how you have showcased the Bank, we are proud to see these pictures that Lotus Bank’s logo is on your jerseys. We see that Lotus Bank is also on your website, with a way to link up the banks’ website with a click on your website, making it available to all Lagosians and our potential customers in Nigeria.

“One of our first branches was opened in Ikorodu and you could see that the commitment to this club and Ikorodu community was heavenly made. We will support you in every way we can and we hope the club wins the NNL and play in the top flight League soon, Welcome to Lotus Bank.”

Ikorodu City FC Executive Director, Kayode Badmus said; “We are delighted to be associated with a top brand like Lotus Bank. It is heartwarming that Lotus Bank has chosen to partner with us on a long-term relationship. We appreciate Lotus Bank for taking this step and they will enjoy massive visibility for their brand through our media mechanism.”

Ikorodu City Football Club is the rebirth of the foremost community-based Football club from Ikorodu Community, popularly known as Bolowotan Football Club (BFC), which was incorporated in 2007 in furtherance of sports, through the training and development of indigent youths to make them responsible citizens.

The club which will compete in the second tier of League Football in Nigeria also launched their official website; www.ikoroducityfc.com at the partnership ceremony with Lotus Bank.

Also at the events were; Ikorodu City FC Board of Directors, Tobi Adepoju, Olawale Quadri and Sulaiman Adebayo, as well as the Club’s Media Manager, Samuel Bamisebi.

Ikorodu City FC will begin their season campaign in the NNL on Saturday, against Giants Brillars at the Teslim Balogun Stadium, Lagos.
The game will kick-off at 4pm.

Injured Neymar thanks fans for support ahead of surgery