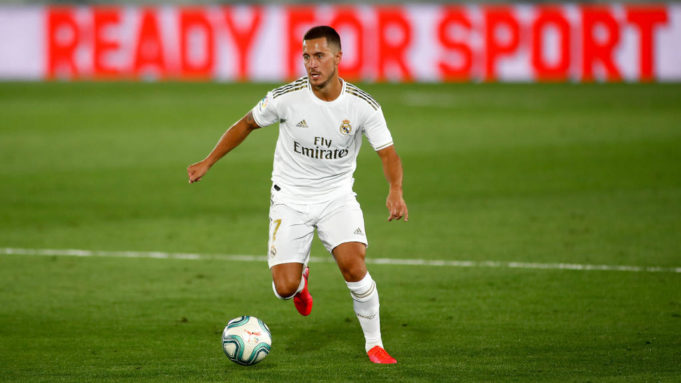 Eden Hazard have travelled with Real Madrid to Germany and could return from injury against Borussia Moenchengladbach in the Champions League, Nairasports.com.ng reports

Hazard’s last appearance came in the Champions League round-of-16 second-leg loss at Manchester City last season, at the end of a first season in Madrid undermined by ankle injuries.

The 29-year-old Belgian went off in the 83rd minute in Manchester and has not played since, victim of a muscular injury to his right thigh.

NAIRASPORTS Reported that Madrid lost their Champions League opener 3-2 at home to Shakhtar Donetsk last Wednesday. They bounced back with a 3-1 Liga victory at Barcelona on Saturday.

Meanwhile, Madrid Head coach, Zinedine Zidane has claimed that he is looking forward for Hazard’s return.

He added that the team wants to emulate the performance of El classico on Saturday.

“That’s good news,  looking forward to Tuesday’s Champions League game. We’re all pleased he’s with us and we’ll see how we use him tomorrow,The important thing is that he’s back and that’s a big positive for us.”

“We want to perform as we did in El Clasico and take the points, The performance we delivered in El Clasico is exactly the kind of display we need to produce tomorrow (Tuesday). We played well, fought as a team and the most important thing is that we try and do that tomorrow.” Zidane said

“We know how important this match is after the defeat against Donetsk, We already have pressure on us. This match is nothing but a final.”

“We have to change this situation,There are only six games in the group.”Kroos said.