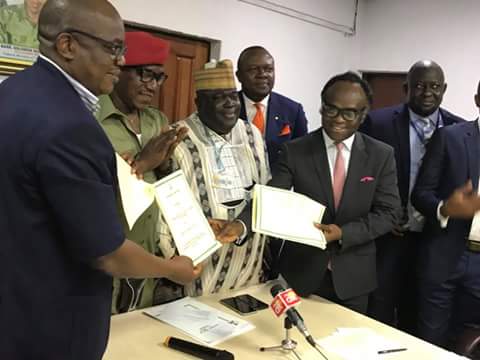 The Ministry of Youth and Sports has signed an agreement with Greenfield Assets LTD to sponsor and promote the next five editions of the National Sports Festival.

At the event which took place on Wednesday in Abuja, the Minister of Youth and Sports Development Barrister Solomon Dalung said that the Ministry approved Greenfield’s proposal following the unwillingness of states to take up hosting rights of the National Sports Festival.

“The prevailing low capacity and motivation of states to host the National Sports Festival is affecting its sustainability and value to the extent that the NSF is gradually getting moribund. It was against this background that Greenfield’s proposal for sponsorship and promotion of the NSF for the next 5 years was approved.

“It is a realistic and strategic option to leverage on private sectors’ capability to mobilize resources that will not only revitalize the NSF but make it more marketable, efficient, innovative and more profitable”.

Barrister Dalung called on Greenfield Assets to bring their experience to bear on the successful sponsorship, promotion and hosting of the 2018 edition and subsequent editions.

Earlier, the Chief Executive Officer of Greenfield Assets Mr Paul Obanua expressed delight in the partnership with the Sports Ministry to give greater impetus to the National Sports Festival.

He pledged his commitment to make the NSF an African touchstone in sporting events, a unifying factor and a national pride.

“Through this patriotic partnership, the NSF will serve as a vehicle for discovering, exposing and nurturing talents that can take our country’s sporting profile to the next level. This PPP initiative promises a win-win outcome for all stakeholders in the Nigerian sports industry.

“With this partnership, we shall create a bigger, wider and more inclusive festival open to mature and professional athletes, with robust management, marketing, sponsorship and promotion support base. This will ultimately make the project rival the best sports festivals anywhere in the world”.

The Permanent Secretary of the Ministry, Mr Olusade Adesola however explained that the ownership of the NSF will still reside with the Ministry which will also be in charge of the technical, organizational and host selection aspect of the games.

The 19th National Sports Festival is scheduled to hold from December 6-16, 2018 in Abuja. 36 states of the federation and the Federal Capital Territory are expected to participate.