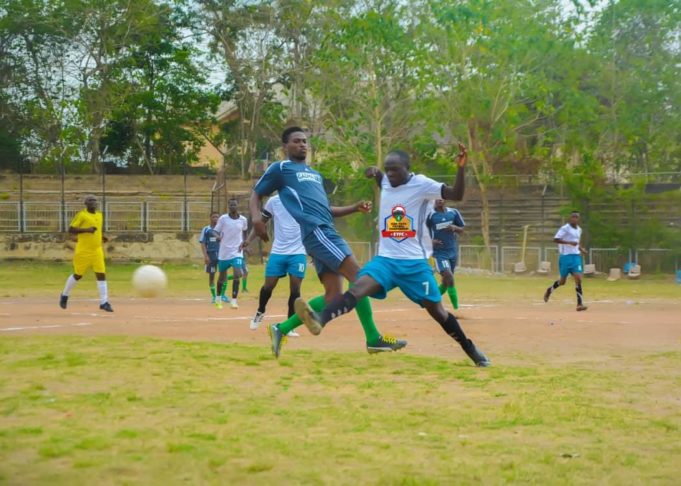 Grass root football in Nigeria has been the starting point for professional footballers in the country but one of the detriment it suffers is hooliganism.

My journey to Ilepako mini stadium, i was privileged to visit a grassroot sport arena somewhere in Lagos state, Agege to be specified. The crowd there was so much that I was forced to asked if the Nigerian Professional league has begun? I actually thought MFM was playing or having training just for me to see grassroot players doing what they love to do.

My eyes gazed to the round leather ball as a different opinion was entering my ears as regard sport development.

Professional footballers were present to play likewise retired players. Right on the pitch, I was told a Nigerian U17 player who was dropped at the last minute screening in Brazil last year Abdullahi Fawaz. The tall midfielder played professionally, his tackles were superb. I discovered he played for an academy in Agege.

What a talent? I asked myself seeing youngsters playing football passionately. At NY course of watching the match I asked a player if he cares playing professional football. “He re ied that most of them on the pitch have their jobs but came to play weekends because of there passion for the sport”.

Right, where he is talking I saw disappointments in his eyes. On the same pitch, I was made to understand that Nigerian player Haruna Luqman played in that pitch. There are Nigerian talents on various streets in the country. I hope they are discovered earlier before it’s too late.

Although this happens everywhere even in Europe, witnessed one of the setbacks that affect grassroot football.

A young boy was attacked by machet fortunately, no serious injury was recorded but the pandemonium stopped the intriguing match at the pitch.

People ran for there lives as a journalist, I stood afar to cover the moment. A young man said as he ran for his life “that’s the problem about this place”.

That revealed many untimely deaths in grassroot football. A fellow said, “The reason stars don’t wish to come to ilepako is because of hooligans” the man lamented. The reason for the disagreement wasn’t cleared enough.

Maximum security is necessary in our local football pitches across the country to avoid loss of talents that are upcoming and fans that will also support them. If the boy had died, that may affect or stop football exercises indefinitely. Fans should tend cautiously as they agree and disagree over an issue.