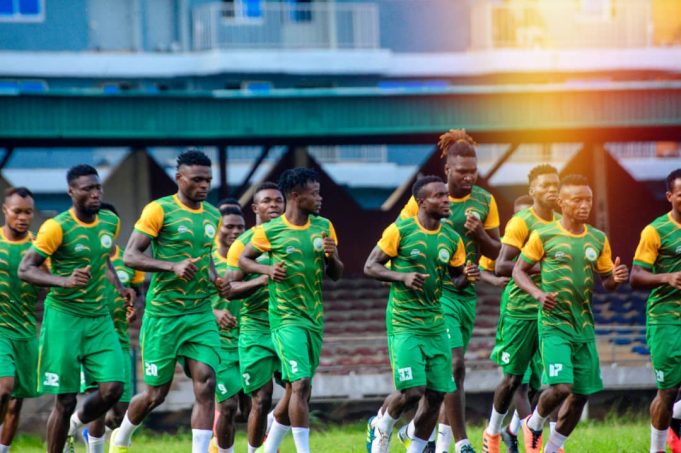 Gateway United made it three wins on a bounce in the 2020/2021 Nigeria National League season with a ruthless 4-1 demolition of visiting side Julius Atete football club at the MKO Abiola Stadium, Kuto, Abeokuta.

After two successive victories against FC One Rocket at home and Apex Krane FC away from home, the momentum was high in today’s encounter and it took just 28 minutes for Gateway United to take the lead.

Anthony Abawula’s long throw caused chaos in the visitors’penalty area and was connected into the net by Julius Atete goalkeeper.

The long throw expert was not done yet, he was once again the centre of attraction as his strength was again put in use, this time it was the rave of the moment Julius Ikechukwu that met the throw on air and headed in Gateway United’s second goal.

Julius Ikechukwu then put the game beyond the visitors with the third goal of the game to complete a brace, he was on hand to head in a beautiful delivery that came from the right side of the pitch.

Harrison Obakpowoma scored what proved to be a mere consolation for the visitors in the 76th minute after being played through on goal.

Gateway United, however, had the last laugh, and again it was Abawula Anthony’s long throw that was converted into the net by J Atete’s player Daniel Adu to complete a resounding victory for the Ogun State sponsored side.

Head coach of Gateway United Hakeem Busari said after the game that he was impressed with the attitude of his boys and charged them to maintain the momentum as the Nigeria National League season gradually hits the home stretch.