FIFA president Gianni Infantino’s latest trip to Africa took him to Dakar, Senegal on February 17, where he met with the President of the Republic Macky Sall at the Presidential Palace to discuss the development of football on the continent. Infantino called for unity in African football.

“Africa needs to unite its forces rather than disperse and work to project African football at the top of world football,” he said.

This call comes in the context of a very sustained electoral campaign for the presidency of the Confederation of African Football (CAF), with the election scheduled for March 12, 2021. Five candidates are running to succeed Ahmad Ahmad and among them is Augustin Senghor, the Senegalese Football Federation (FSF) president, who was present when Infantino made the statement.

While the candidates are multiplying meetings and trips to seek support from football authorities around the continent, this message from the FIFA president sounds like a reminder to return to basics: the development of African football.

Infantino believes there is everything required. “There is talent, there is passion, and there is investment that is beginning to come in. All these need to be coordinated. African football needs to work as a unit for the future and FIFA will be at its side for that,” he stated

During his meeting with President Macky Sall, Gianni infantino also addressed the issue of the development of Senegalese football. “We talked about projects and plans with the Senegalese Football Federation to develop football here in the country and football in Africa with the role that Senegal must play. Senegal, which is an important country not only in terms of football, but it is an important country in Africa and in the world with a respected president like President Sall, can play an important role in world football,” Infantino said.

According to the FIFA president, Senegal would be on a good dynamic, ensured by the government’s efforts in the field of infrastructure with the construction of the new stadium and the announced renovation of the Leopold Senghor stadium. “Senegal needs stadiums like the one being built. I think there is a real movement here to really accelerate the Senegalese football development.”

Infantino and Sall also spoke about youth and women’s football, which is very dear to FIFA General Secretary Fatouma Samoura, who was also part of the delegation. “The FIFA Secretary General is Senegalese, so we are here at home,” Infantino said. 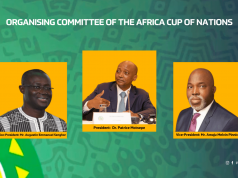 Liverpool release statement after fans attacked ahead of Roma clash