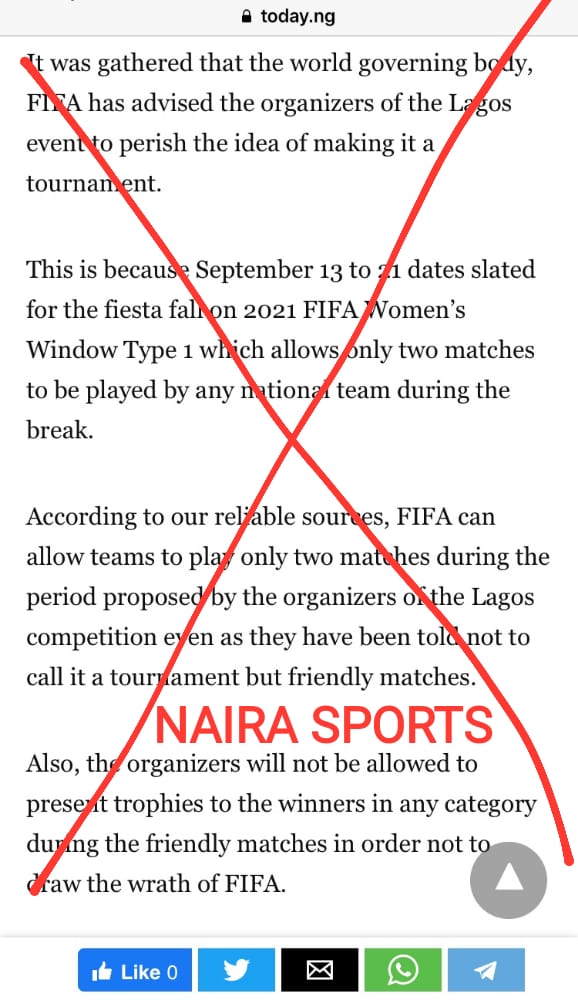 CLAIM:
Digital news website today.ng reported that the organizers of the Aisha Buhari Cup will not be allowed to present a trophy at the maiden edition of the event and if they did, FIFA will penalize them.

FULL TEXT
A viral publication has been making rounds on the internet about the awarding of a trophy to the winner of Aisha Buhari Cup. The story first appeared on Today’s website on September 7, 2021 by 1:34 pm before being plagiarized by other platforms like NigeriaSoccernet and Sport Journalist Monsurah Olatunji.

According to Today, “It was gathered that the world governing body, FIFA has advised the organizers of the Lagos event to perish the idea of making it a tournament.

“This is because September 13 to 21 dates slated for the fiesta fall on 2021 FIFA Women’s Window Type 1 which allows only two matches to be played by any national team during the break.”

“According to our reliable sources, FIFA can allow teams to play only two matches during the period proposed by the organizers of the Lagos competition even as they have been told not to call it a tournament but friendly matches.”

“Also, the organizers will not be allowed to present trophies to the winners in any category during the friendly matches in order not to draw the wrath of FIFA.”

VERIFICATION
As part of the accredited media organization covering the tournament, Nairasports began its verification by reaching out to the organizers and we gathered that the week-long event will produce a winner.

The Director of Organization of the tournament, Mrs. Aisha Falode Confirmed that to NAIRA SPORTS that “there will be a trophy” on Tuesday and the criteria for choosing the winner “will be points per game (PPG).”

Further verifications on the entirety of the same report reveals that the tournament was rightfully redesignated by FIFA as non-competitive friendly games.

NAIRA SPORTS also understands that the competition was organized conventionally where the participating six national teams were grouped equally, in which each team is scheduled for two matches against other teams in the same group and the two teams finishing first and second in each group will qualify to the knockout stage.

The knockout stage was scheduled to begin with the semi-finals. Followed by the third-place match (contested by the losing semi-finalists), and the final, between 13th to 21st September 2021.

During the course of our verification, we found out that this scheduling was against FIFA rules and regulations as the governing body restricted all countries to play just two matches during the September 13-21 international window they tagged as “Type I”.

The first letter was for confirmation that the invitational tournament will be eligible for ranking of participating teams while the second letter provided the Local Organizing Committee with a final go-ahead to stage the maiden edition of the Aisha Buhari Invitational Women’s Tournament.

In lieu of this development, the organizers were forced to scrap the initial tournament schedule and come up with a new format publicly on September 8.

“The competition will commence on Wednesday, September 15 and end on Tuesday, September 21, 2021. This is in compliance with the force majeure article in the tournament’s regulation – chapter 4, article 4.3.4. and article 51.1. Teams and their members of official delegation are to arrive in Nigeria on 13 September 2021.” A statement on the official Facebook page.

CONCLUSION
Given the evidence available, the report that the organizers will not be allowed to present trophies to the winners in any category in order not to draw the wrath of FIFA is untrue as claimed.