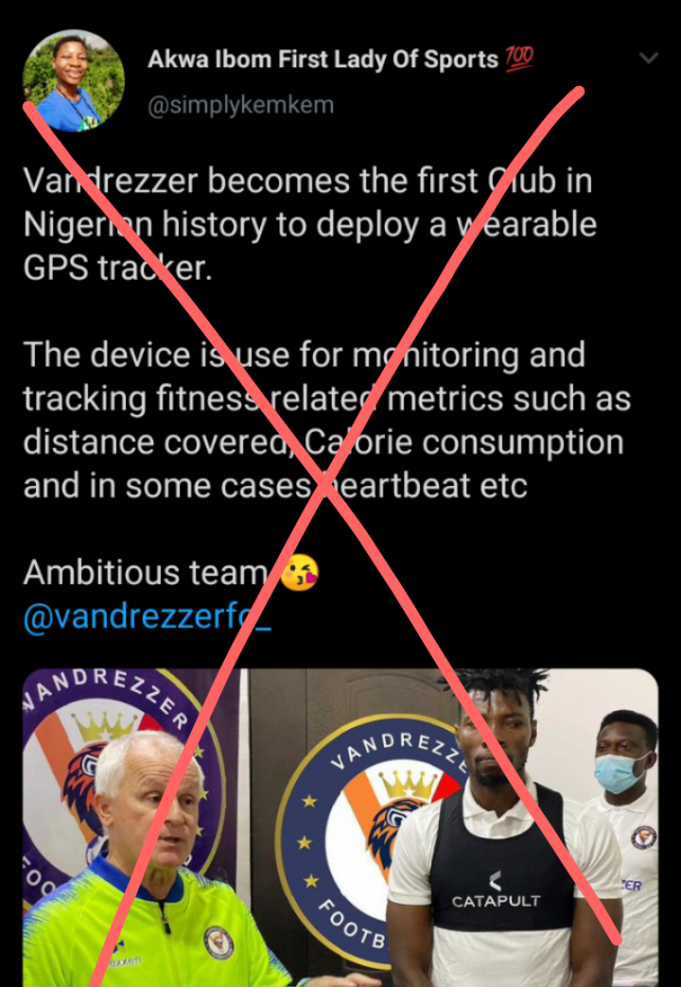 Vandrezzer FC has made history as the first Nigerian football team to deploy a wearable GPS tracker for its players.

Newly appointed team captain Onyekachi Akakem did the honours of launching the tracker, during a session with our sports science Director Chris Barnes, who explained the workings of the tracker to the team.

Deployed by elite clubs across Europe and the United Kingdom, the wearable GPS tracker also known as activity tracker or fitness tracker, is a device or application for monitoring and tracking fitness-related metrics such as distance walked or run, calorie consumption, and in some cases heartbeat.

During the class, Barnes disclosed that all the attributes of the tracker were geared towards preparing the players for the demands of competition by managing workloads and monitoring their development. “It will also reduce injury risk

and help the coach know when to keep pushing you and when to slow down to avoid preventable injuries” Barnes added.

The GPS tracker is also used to objectively manage the rehabilitation process of a recovering player, through performance benchmarking and robust return to play protocols.

The wearable GPS tracker has been embraced by advanced sports teams all over the world because of its technology, trusted to drive performance at all levels of sports, with the ability to push athletes to new heights.

Speaking about the importance of technology in modern day sports development, Kenny Boyd, Senior  Associate Director for Student- Athlete Health & Wellness said – “the ability to have all our data, information and planning tools in one platform will mean we can better understand and manage student athlete’s health and wellness insights.”

Upon purchase of the GPS tracker and other sports technological equipment, VFC President Joe Udofia had said ” Vandrezzer will chase development of football at the expense of buying our way through or deploying an unethical, do or die mentality of winning three points at all cost. This is a promise. We call on other clubs and stakeholders to embrace this (Vandrezzer Way) path for the genuine growth of the game in Nigeria.”

Among many firsts, VFC is the only Nigerian football club to have a sports science department, and to acquire the wearable GPS tracker, among other equipment

A lagos based club, 36 lions had earlier used GPS tracker in 2019, Shooting Stars of Ibadan also used it during her preseason tournament in Ijebu Ode earlier year with other top clubs using the GPS tracker.