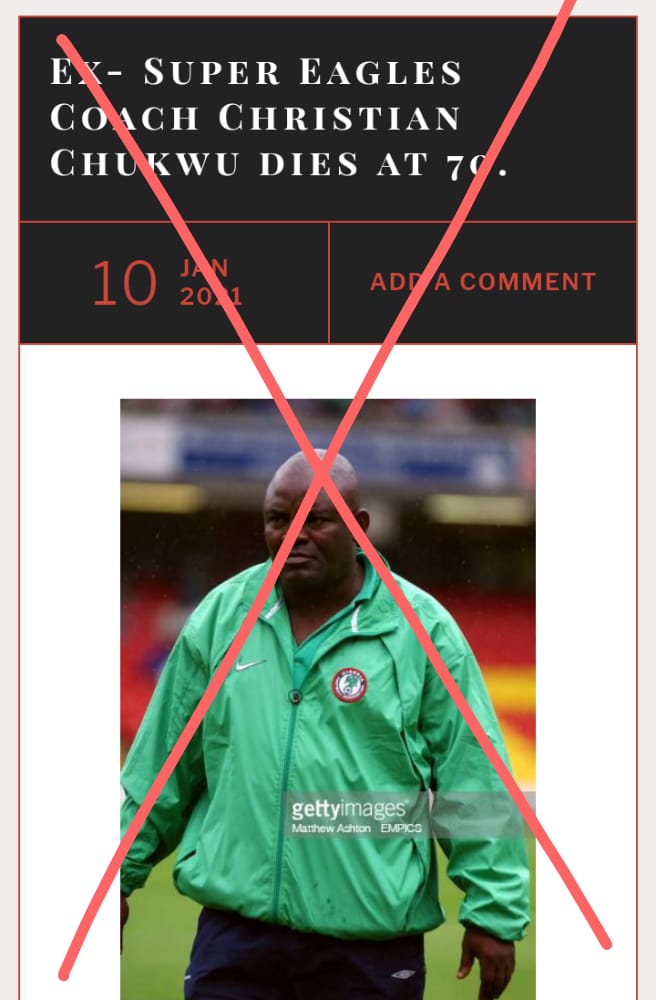 It is sadden that one of the legends and heroes of this great nation, Christian Chukwu is dead (born 4 January 1951). He passed on yesterday (Saturday 9th 2021) at the age of 70 after just few days he was celebrated for his birthday by several people.

He has been battling with prostrate cancer which was made known to the public in April, 2020 revealing his inability to continue with his medical bills which prompted volunteers to help offset the bills.

GoFundMe campaigned fund raising of $US50,000 in flying the former Enugu Rangers to the United States for treatment which billionaire Femi Otedola, stepped in and offered to offset the bill with the exact amount which made it possible for Chukwu to travel to the United Kingdom to seek professional medical health.

He was a former Nigerian footballer, former national team coach, a defender in his playing days and captained the Nigeria national team to its first win in the African Nations Cup.
He also captained Enugu Rangers to victory in the African Cup Winners’ Cup in 1977 and Super Eagles to their first ever Africa Cup of Nations title in Nigeria 1980.

He was an assistant to Clemens Westerhof as the Super Eagles claimed their second Afcon title in 1994, coached Super Eagles from 2003 to 2005 leading the team to 2004 African Cup of Nations semifinals.

He was blamed for lack of coaching skills and poor management of the team during the 2006 World Cup qualification.

It is a great loss for his family, Enugu State and the country at large.

May his soul rest in peace.

NAIRA SPORTS confirmed that Vanguard Editor,Onochie Anibeze spoke with Chukwu on Sunday, January 10 and said Chukwu was embarrassed by the rumour. He quoted Chukwu as saying that his phone has not stopped ringing since Saturday night.