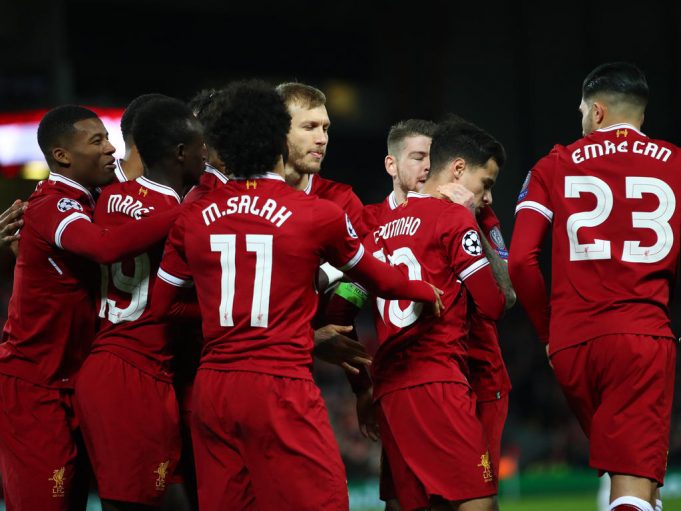 Philippe Coutinho’s first Liverpool hat-trick propelled Jurgen Klopp’s side to a 7-0 thrashing of Spartak Moscow on Wednesday that swept the Merseyside club into the Champions League last 16.

Sadio Mane scored twice and Roberto Firmino and Mohamed Salah both found the net as Liverpool’s ‘Fab Four’ emphatically returned the five-time champions to the knockout rounds after a nine-year absence.

Group E winners Liverpool joined Manchester United, Manchester City, Chelsea and Tottenham Hotspur in progressing from the group phase, making England the first country to send five teams into the round of 16.

“We opened the game perfectly and after we took the lead, we didn’t have to defend,” Klopp told BT Sport.

“It’s really difficult when we go to the next gear and use the space. It was nice to watch tonight.”

It was Liverpool’s second hefty group-stage win after a 7-0 rout of Maribor and erased memories of their previous outing in the competition, when they squandered a 3-0 lead to draw 3-3 away to runners-up Sevilla.

With Liverpool having plundered 32 goals in their last nine games, few teams will relish the prospect of facing off against Coutinho, Salah, Mane and Firmino in the last 16, the draw for which takes place on Monday.

“I don’t mind too much who we get,” Klopp added. “Usually I always get Real Madrid, so we will see.”

Klopp will have to do without Emre Can for the first leg of the last 16 tie, after the midfielder was booked against Spartak, and victory also came at the cost of an injury to left-back Alberto Moreno.

But those were the only bum notes on an evening when a Liverpool team showing five changes from Saturday’s 5-1 romp at Brighton and Hove Albion found themselves 3-0 up inside 18 minutes.

Coutinho sparked things off in the fourth minute, the Brazilian rolling a penalty into the bottom-right corner after Georgi Dzhikiya had barged into Salah as they waited for Coutinho’s deep cross to reach them.

Liverpool’s second goal, in the 15th minute, was a delight that showcased the ‘Fab Four’ at their clinical best.

From Mane’s pass, Salah sent the ball out to Firmino on the right and his selfless square ball allowed Coutinho to tuck away his 50th goal in Liverpool colours.

Spartak’s defending was as desperate as Liverpool’s attacking was dazzling and a clumsy touch by Serdar Tasci opened the door to a third goal.

Unable to react quickly enough to Mane’s cross, the German centre-back inadvertently presented the ball on a plate to Firmino, who used the outside of his right foot to steer a shot past Aleksandr Selikhov.

It was not all plain sailing for Klopp’s men, however.

Can picked up a seventh-minute booking that triggered a one-game ban for sliding in on Ze Luis and Moreno hobbled off just before half-time after jarring his knee as he blocked a shot from Roman Zobnin.

James Milner took Moreno’s place and made an immediate impact in the second half, swinging over a cross in the 47th minute that was brilliantly volleyed home by Mane at the back post.

Three minutes later Coutinho added a fifth, charging onto Milner’s pass and dispatching a shot that found its way past Selikhov via a deflection off Salvatore Bocchetti.

More:Pacquiao has been promoted to full Colonel of the Philippines Army.

Mane made it 6-0 with 14 minutes remaining, hooking in a low cross from substitute Daniel Sturridge, before Salah completed a resounding win with a sublime turn followed by a right-foot finish into the top-right corner.

“The players almost played like they were afraid,” said the Italian, whose side dropped into the Europa League.

“It proved Spartak aren’t ready for this level of football. Today we lacked quality in all aspects of football.”

Everton, who visit Anfield in Sunday’s derby, were left with plenty of food for thought.