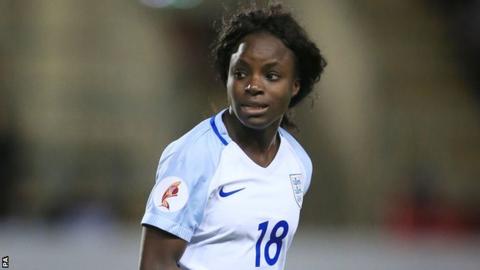 The minister also said the FA must fix its culture
“from the top down”.

Bardsley returns to England squad for World
Cup qualifiers
Crouch was speaking to the Digital, Culture,
Media and Sport committee a month after Aluko
appeared in front of the same panel to describe
her experience of raising a bullying and
discrimination complaint against Sampson.
Aluko, who has won 102 caps, lost her place in
the team after making unproven allegations of
bullying in a 2016 FA cultural review.
In a BBC Sport interview last week, she said she
was “open” to being part of the reform process
at the FA.

Crouch said that the FA’s handling of the case
had been “a mess” and “a sorry saga”.
However, when asked whether chairman Greg
Clarke and chief executive Martin Glenn should
leave the organisation, she said: “It’s not for the
minister of state to say whether or not a chair or
chief executive of a governing body should or
should not be in place… because if I can fire
them, I can hire them.

“We criticise countries like China and Russia for
the closeness their governments have with their
sports organisations and it’s not my job to say a
chair or chief executive should or should not be
fired.”

Sampson was sacked in September following
evidence of “inappropriate and unacceptable”
behaviour with female players in a previous role.