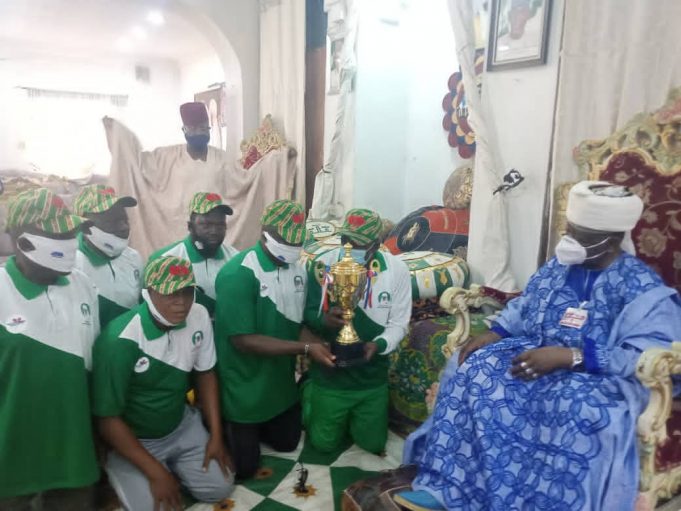 The maiden edition of Emir of Ilorin Table Tennis Championship 2021 received a huge boost on Thursday when the Emir of Ilorin,HRH Alhaji Dr . Ibrahim Sulu Gambari, (CFR) endorsed the competition.

Receiving the Local Organising Committee (LOC) of the Championship in his Palace ,the Chairman of Kwara State Council of Emirs and Obas expressed his delight at the initiative and commended the organisers for their effort.

A sport enthusiast himself, the first class traditional ruler in his words applauded  the organizers for honoring him with the Championship as he  stressed the significance of sports in fostering unity and love among the people.

“By grace of Almighty Allah, I have accepted this trophy you presented to me and  this Championship as well.” said the monarch who reminisced his active days on the court.

While describing the immense
opportunities that abound for the athletes,he prayed for the success of the competition and expressed optimism that it will sprout to become a platform for youth development.

Earlier in his remarks, the Chairman of the LOC, Alhaji Nurudeen Ibrahim revealed that the championship is aimed at discovering hidden talents, engage the youth in a productive venture and also promote healthy living through sports, particularly Table Tennis.

“We are here to seek for the blessings,support and endorsement of our father in a bid to achieve success in this programme” the LOC Chairman stated.

He lauded the Emir for his unrelenting efforts in the development, progress and welfare of his people referencing among many of his recent initiatives which includes palliatives distribution to cushion the effects of Covid-19 and the support to the victims of rainstorm in Ilorin and its environs.

The Chairman recalled that the state had in the past produced Table Tennis players of repute like Atanda Musa, Bayo Kadara, Segun Toriola, Kasali Lasisi and other sports athletes who have done the state proud adding that the competition will produce the next world stars.

Mallam Alarape Atanda, the  Director of Sports Council,Kwara State who was also on the train with his management;;;  thanked the Emir for accepting the championship and assured him of a befitting tournament which will meet all expectations.

Among many other personalities at the event
were the Chairman of Kwara State Table Tennis Association, Mr Sola Owolabi, Vice Chairman, Barrister Yakub
Orisankoko,Secretary to the Association, Mrs Folashade Asaju, the Chief Coach of the Table Tennis in the State, Kehinde Aiyelabegan,the Assistant Coach, Abdulkadir Kadir and Mallam Ibrahim D. Sheu among others.

Management members of the Kwara State Sports Council at the palace were the Head of Coaching and Research, Mrs Patience Lawal, Head of Organising, Alhaja Afusat Adesoye, Secretary to the Council, Adebisi Abayomi, Head of School Sports, Ahmed Adebayo and a host of others.

The maiden edition of Emir of Ilorin Table Tennis Championship has been scheduled to hold in May and June this year. Preliminaries of the competition will hold across all the 16 local government of Kwara State before the finals comes up later in the capital city of Ilorin.

WAFU B U17: 13 Golden Eaglets players to Undergo MRI Test...