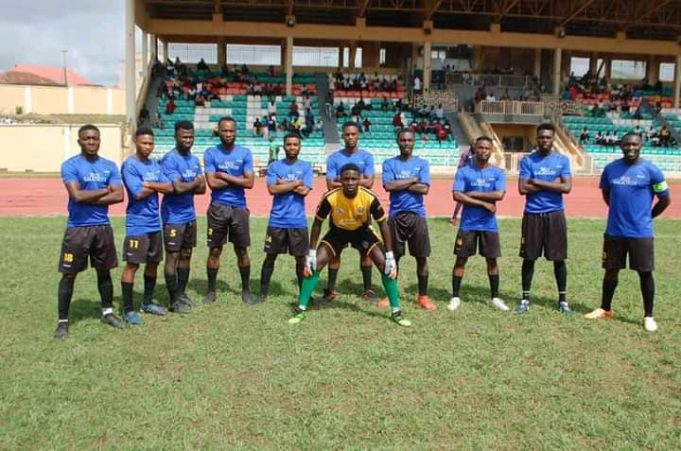 EKSU Galaticos has recorded her first win against Ado United at the ongoing BAFEM Cup.

The Match was a tough one as the players of the two teams were gleaming while doing what they love to do on the pitch.

At the early stage, Olathele Rasak of Ado United had a clear chance to give his team the lead but EKSU goalkeeper saved the ball. The early attempt created an intense on EKSU Galaticos players and their fans,as they put in more efforts.

The Galaticos were the better side during the first half as they played enormously and had a lot of chances to go ahead.

The teams played flawlessly so as to push their team forward to get a lead but Ayilaru Tope gave the Galaticos the lead in the 40 minutes.

The second half was tough than the first half as Ado United players tried to equalize to restore the tense of the game.

Suraj Akande sealed the victory for EKSU after he tapped in from a cross, to record first victory in the competition after losing first game.

Reacting after the victory, EKSU head Coach, Babajide Coupon said that he worked on the lapses of last game.

According to him, ” What happened in the last match wanted to happen again in today’s match. But we went home to go and settle. We settled to finish our assignments. We discovered where we were lacking and we have blocked the hole but thank God for the match, For the school and the students that are here to support us,thanks to them, We still need more fans. There are a lot of places where our guys are still lacking but we are going to train more to fill all the lapes.” he said

The Ado United team coach, Afolabi Mayowa lamented on the performance of his players.

In his words, “there were lot of mistakes from his players but they will fight harder in their next match and they are hoping to qualify out of the group.

EKSU Galaticos will be playing the lions gate in her last group game.