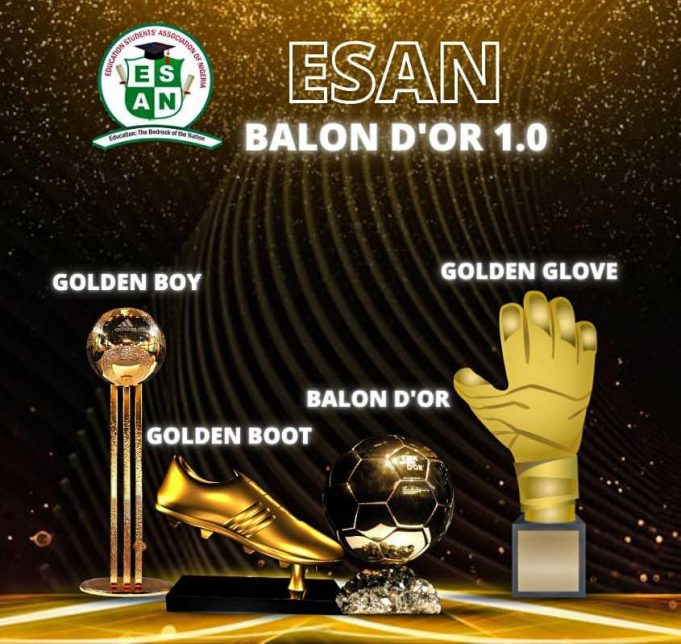 It means the likes of Jingle Bell and Arisam will be vying for two separate individual gongs rather than one from now on.

Ahead of the inaugural ceremony on Tuesday, NAIRA SPORTS has all the information you need to know about the event.

WHAT IS THE ESAN BALLON D’OR?

The ESAN Ballon D’or is an annual awards presented by Education Students’ Association of Nigeria, Federal College of Education, Abeokuta in affiliation with the University of Ibadan (ESAN UI-FCEABK) to the game’s top players.

The awards, in it’s first year, will be launched to replace the sporting categories of ESAN Awards. The Ballon d’Or will be presented by the office of Sport Director and will no longer be the office of Social Director, who will instead hand out their own prizes.

On April 6, KHE trio of Jingle Bell, Toki Daniel and Azeez Habeeb were revealed as part of the final five contenders for the ESAN Ballon D’or.

The Ballon D’or award started with a 120-man shortlist of all the players that participated in CESPORF drawn by a group of experts from the sport director’s office and the supreme press platform.

WHAT IS THE AWARD CATEGORIES?

WHO DECIDES THE AWARDS?

From this year on, the male’s best footballer/sportsman will now be more complex with the use of 40-man panelists instead of being judged solely by online public votes than can be influenced by athletes with bigger social media presence.

Sixty per cent of the decision will be based on the votes of captains and coaches from level and departmental teams in the school, with the other fourty per cent to be split between the media representatives (15%), departmental sport directors (20%) and office of ESAN Sport Director (2%) who has the power of tiebreaker.

WHEN WILL THIS YEAR’S WINNERS ANNOUNCED?

This year’s award ceremony will take place on Tuesday, April 13, 2021 at COEASU Hall in FCE Abeokuta, with coverage beginning at 5:30PM.

The ceremony will be hosted by ESAN’s Social Director, Oreoluwa Atanda and will feature musical performances by top artists in the institution.

WHO ARE THE LIKELY WINNERS?

The student’s governing body, ESAN through the sport director, Peter Egbejimi have released the shortlist for its maiden end-of-year awards, with KHE duo of Abeeb Azeez and Boluwatife Oduntan and ISS/FRENCH’s Abdulganiu Bello in the race for the men’s best player award.

There is no current holder of the title as the award is in it’s first year, while Abeeb is making his last appearance as a finalist, Boluwatife and Abdulganiu looks set to be an household name in years to come but it remains unknown who will be crowned as king after the rebrand process.

It’s only the first time ESAN will award the title to a player, with the association previously issuing similar award of the same sporting value through the office of the social director as the main award.

Boluwatife (Jingle Bell) is the favourite to win the award, having inspired the merged Human Kinetics and Health Education department to the a third Centre for Degree Programmes Sport Festival (CESPORF) success in as many years.

The 300 level midfield maestro, a proven dead ball specialist, made a superb start to the current campaign, winning the golden boot outrightly in the process with 6 goals in the two official competitions.

Another hot favourite to land the male’s Player of the Year crown at ESAN dinner and awards show is Azeez Habeeb.

The form of the KHE’s captain dipped during the CESPORF as he struggled in front of goals, failing to score in 4 of the 5 games he played but his off-pitch morals, show of professionalism and overall performance throughout the 2019/20 football season earned him a deserved spot in the final 3.

Lastly on the list is Abdulganiu Bello (Psychomotor), a direct-entry freshman aiming to be most decorated individual of the day after his jaw-dropping performance in CESPORF.

The box-to-box midfielder almost did the impossible when he singlehandedly carried his departmental team to their first CESPORF final in eight years despite playing all the games in the tournament with injury.

WHAT IS CEDEP ULTIMATE XI

As well as individual awards, the Centre for Degree Programmes (CEDEP) ULTIMATE XI will be announced at the ceremony, identifying the 11 best players in the school for the 2019/2020 football season.

ESAN polled the 40 panelists, asking for their best goalkeeper, four defenders, three midfielders and three forwards for the 2019/20 season.

A longlist of 32 players was announced on September 20 , with KHE boasting a record 15 players in that group.

In total, there were two goalkeepers, 11 defenders, 9 midfielders and 9 forwards on the longlist.

HOW CAN I WATCH OR ATTEND THE AWARDS?