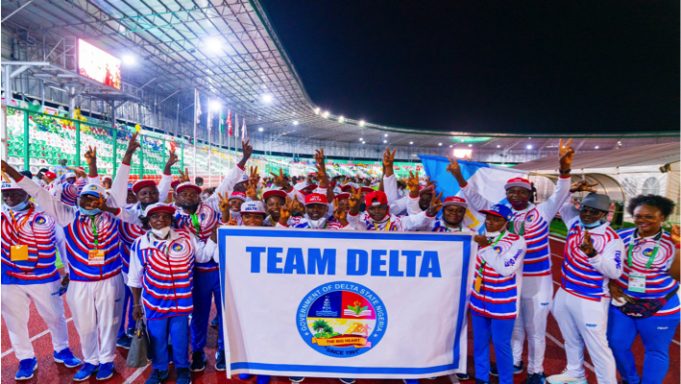 Defending champions Delta on Tuesday won more gold medals to gain an unassailable lead and put a gap between them and the rest at the 20th National Sports Festival (NSF).

Team Delta took their tally to a total of 298 medals, comprising 124 gold, 91 silver and 83 bronze, to maintain their lead and mathematically emerge champions of the festival.

What this means is that, with just a few events to be decided and on the festival’s penultimate day, Team Delta have retained their title again.

This is based on the medals table released by the festival’s Games Services Unit at 4:33 p.m. on Tuesday.

Hosts Edo, Delta’s nearest challengers, will have to win 21 gold medals at least to upstage them.

Bayelsa are a distant third with 48 gold, 42 silver and 49 bronze for a total of 139 medals, while Rivers are in fourth place.

Akwa Ibom is in sixth place with 77 medals, made up of 17 gold, 21 silver and 39 bronze, edging Oyo state into seventh place with just a two-medal advantage.

Plateau is 10th with eight gold, nine silver and 15 bronze for a total of 32 medals.

Jigawa brought up the rear with no medal won after 10 days of competition.

The festival which got underway with the arrival of athletes and officials on April 2 got into competition mode on April 6.

The festival tagged “Edo 2020” will officially end on Wednesday, with all participants scheduled to depart on Thursday.