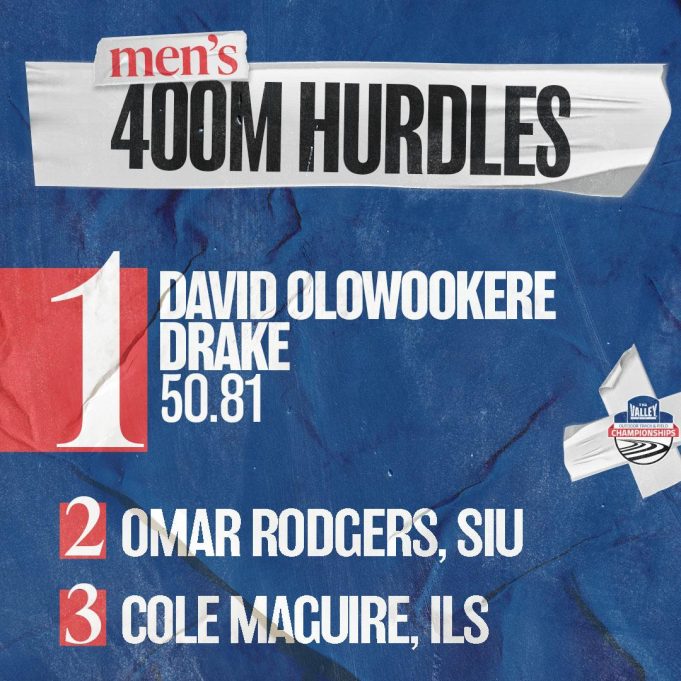 David Olowookere emerged the  champion in the men’s 400mh event and a silver medalist in 4x100m relay at the just concluded Missouri Valley Conference Outdoor Track and Field Championship in the United States of America.

Olowookere who represented Drake University where he is currently studying Law, Politics and Society as a freshman became the champion in his event with the personal best of 50.81 seconds which made him ranked the number 4 fastest time ever ran in the Drake University track and field history.

His achievement saw him scooping the ‘best outstanding male athlete’ award and the podium success really excited talented runner who had earlier declared that he is in the US to make Nigeria proud.

‘I am very happy about this. I saw it coming but never knew it will come this way. The last time I was celebrated like this was in the 2018 National Sports Festival in Abuja- So I am really happy” said David in an exclusive Interview with www.owosport.ng.com.

“It means a lot to me and my career because I had earlier run
50.95 seconds in my event and later 50.81 seconds within the space of a week -its a massive one for me” remarked David while relishing his new record”

Consequently after the championship, David has now been ranked number one in his event in the Missouri Valley Conference region, 18th position in the West Region and 23rd in the ratings of Universities athletes in the whole of United States.

While expressing his gratitude to God for his success, he thanked his parents, coaches, family, friends and well wishers back home in Nigeria for their unwavering support to his growing career.

He advised that Coaches in Nigeria should take the opportunity of training an athlete as a divine job but not that of special privilege.

Neymar instructs his father to finalise his Real Madrid move before...