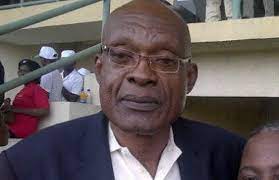 Emmanuel Okala, who was once rated as the best goalkeeper in Africa, was the centre of attention yesterday when the Nigerian football family marked his 70th birthday.

Okala, who won the country’s first African Footballer of the Year Award in 1977, was born 70 years ago in Onitsha, Anambra State.

Standing between the sticks at six feet five inches, Okala emerged during an era that Nigeria produced a long line of exceptional goalkeepers, including Inua Rigogo, Peter Fregene, Amusa Adisa and Eyo Essien. He earned his first cap in a friendly against Tanzania in Lagos that Nigeria won 3-2, and was in the team that won All Africa Games football gold in Lagos in 1973, took bronze medals at the Africa Cup of Nations in 1978 and finished as runners-up at the All Africa Games in Algiers four months later.

Okala was also in the Green Eagles’ squad that won Nigeria’s first Africa Cup of Nations on home soil in 1980. He was named Africa’s best goalkeeper by the Africa Sports Journalists Union in 1975 and was in the Rangers FC squad that won the Africa Cup Winners’ Cup in 1977.

Leading the celebration yesterday was Sports Minister, Sunday Dare, who thanked Okala for his services to the country and prayed that God will continue to preserve the former Enugu Rangers goalkeeper.

Dare said, “You are truly an icon whose place in Nigerian and African football is already assured. Your role in winning the 1980 Nations Cup and other accomplishments cannot be forgotten. We will continue to celebrate you and pray to God to endow you with good health and long life. God bless you and thanks for all the great memories.”

In his congratulatory message to Okala, Nigeria Football Federation (NFF) General Secretary, Dr. Mohammed Sanusi, praised the towering former goaltender for his glorious service to fatherland in the round leather game, delivering his best anytime he turned out for both the Green Eagles and Rangers of Enugu.

He said, “We all remember the heroic feats and unforgettable deeds of the great Emmanuel Okala. He served Nigeria to the best of his ability and we commend him for his patriotism, discipline, dedication and sense of duty. We wish him a happy Platinum anniversary celebration and many pray that he lives many, many more years in good health and in joy,” Sanusi said.

Former Nigerian captain, Segun Odegbami, who has a longstanding relationship with Okala dating to their days in the national team, christened yesterday as “a special day in the life of one of Africa’s greatest football heroes.”

Recalling Okala’s heroics in goal for Nigeria, Odegbami eulogised the “man who manned the goalposts for the national team of Nigeria, the Green Eagles, for 10 years, and also for the club that became the greatest post-Civil War Movement of the Igbos (Rangers International Football Club of Enugu); the first ‘Chairman’ in Nigerian football before his own captain, Christian Chukwu, earned and inherited the sobriquet; the most recognisable figure in the whole of African football throughout the 1970s because of his awesome feats on the football field and his towering imposing 1.9m (6ft 5 inches) physique; the one nicknamed ‘Tallest’ and ‘Man Mountain’ by the late legendary radio sportscaster, Ernest Okonkwo.”