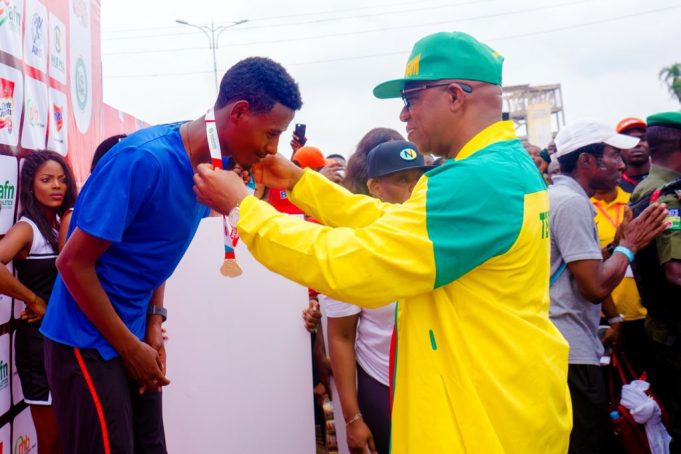 Foremost Nigerian sport entrepreneur and former commissioner for youth and sports in Ogun State, Hon. Bukola Olopade has given the Prince Dapo Abiodun led Ogun State government a thumbs up for creating an enabling environment for sports to thrive in different spheres.

Hon. Olopade’s comments were direct reactions to some unfounded statements credited to former Federal House of Representatives member, Ladi Adebutu who claimed that the Ogun State government has paralysed the sports sector.

In his response, Hon. Olopade highlighted the numerous impact of the Prince Dapo Abiodun led Administration on sports and described the government as one with a clear sense of focus on how to develop Sports.

In his words, he said ” The Ogun State government under Dapo Abiodun has created a very solid and enabling environment for sports entrepreneurs to thrive, many road races have been happening in the state through Nilayo Sports Management Limited as a result of the welcoming ideas and initiative of Prince Dapo Abiodun”.

“This is a government that is very strategic in it’s approach towards developing every aspect in Ogun State, take a look at the Agricultural policies, look at the road maintenance and construction, look at their financial engineering and you will agree with me that in the last twenty years, this is the best government Ogun State has had in two years”.

“While i acknowledge the fact that the government of Otunba Gbenga Daniel that I was part of, was an extremely successful and very creative government, I disagree with Hon. Ladi Adebutu who can only talk rhetorics according to himself and his party, he has not shown any strategic policy that he wants to put in place towards doing anything for sports development”.

“I make bold as one of the biggest sports stakeholders in the country to give a vote of confidence to the Prince Dapo Abiodun led government on their approach towards sports development”.

The former sports commissioner in the Gateway state who is the Chief Executive Officer of Nilayo Sports Management Limited also reflected on the enabling environment given by the Prince Dapo Abiodun led government which has paved way for the construction of one of the best sporting facility in the country.

“Under this government, Hon. Kunle Soname and his team are building one of the best sporting facility ever seen in this country, the government has taken the initiative to put into law both the sports Commission and the sports trust fund”

The man who was in charge of Ogun State sports when it hosted the 2006 Gateway Games also talked about the rapid growth of teams like FC Nilayo, Remo Stars and Olumo United who are having it smooth under this administration.

Honourable Olopade gave kudos to the commissioner for sports Dr. Kehinde Oluwadare for managing the talents extremely well, he posited that Team Ogun’s exploits at the 20th National sports festival further gave credence to what the government of the day stands for as regards the sports sector.

The recently inaugurated Gateway Tertiary Institution Games, GATIG committe is also an attestation that the government has strategic plans to commit so much into sports management and sports development, Hon. Olopade concluded.