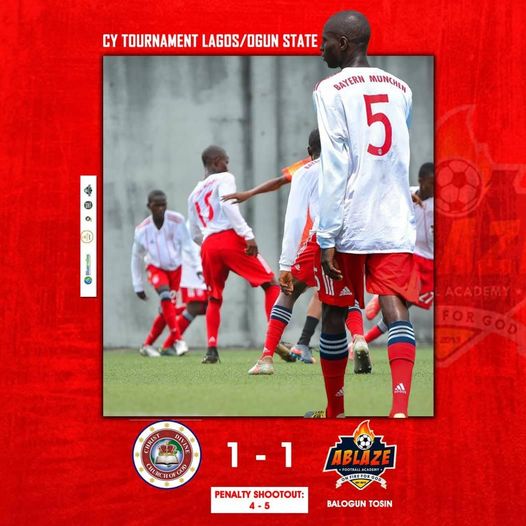 The Blazers goalkeeper was the hero of the day in Round of 16 as he saved  penalty for his team to send them into the last eight.

The Blazers went ahead with a good goal from Tosin after a goalless first half,  It was all round fantastic football as the Blazers gets all the fans at Jalisco pitch on their side.

Blazers  were unlucky as the opponent got an equalizer after a deflected punch fell into the legs of the opponent to tap in at close range.

The game went into penalty shootout where once again Adesuji Olamide makes it his routine with another super save.

The Blazers made it to the quarter finals becoming the youngest team in the history of the tournament to do so and in dramatic style.

They achieved it at their first try in the tournament which they entered immediately after becoming third at the Bolowotan Cup.

The likes of injured Hassan Haddi and now present goalkeeper of 36 Lion FC Okeoghene came out to support the team.

The Blazers move to Joju, Ogun State to face Spice FC at the quarter finals of the tournament.