Diego Costa’s third goal in four matches wasn’t enough for Atletico Madrid as Sevilla twice scored late to stun their hosts 2-1 in the first leg of the Copa del Rey quarter-finals on Wednesday, while Valencia also came from a goal down to beat lowly Alaves.

Costa struck for dominant Atletico on his first appearance since being sent off for wildly celebrating his last goal at Getafe, this one a superb first-time shot past Sevilla keeper Sergio Rico after the ball ricocheted to him in the 73rd minute.

Barcelona are at local rivals Espanyol in Wednesday’s late game 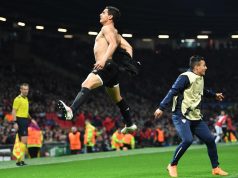