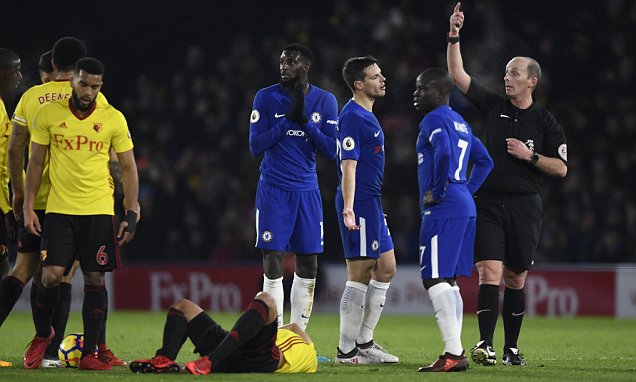 Chelsea manager, Antonio Conte, has heaped a huge portion of the blame of the Blues losing to Watford to the dismal performance of summer signing of Tiemoue Bakayoko who got a red card in the first half of the game.

The French midfielder who was signed Conte for £40m in the summer looked out of his depth from the first minute, gifting Watford multiple chances to score.

Chelsea’s fans were enraged with his brief performance, aiming abusive songs in the 23-year-old’s direction.

The Blues have won just once in their last five Premier League game and time appears to be running out for their boss.

“Two yellow cards in a few minutes, for sure you have to pay attention to avoid this situation,” he said after the game.

“It was a difficult moment for us and then to go down 10 men and play with 10 players it wasn’t good.

“I didn’t see what happened with the penalty.

“We lost the game, I think we started in a bad way. We were very poor.”
Conte handed Olivier Giroud his debut in the second half but the former Arsenal striker could not do much as Watford netted three times in the last 10 minutes to seal a famous win.

The west London outfit are in action next Monday as they host West Brom at Stamford bridge.