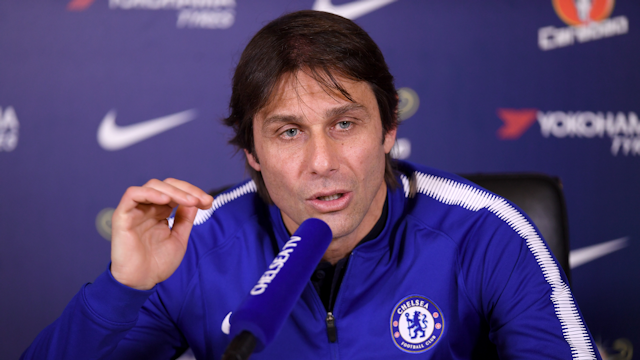 In his media conference on Tuesday afternoon, Antonio Conte gave some squad news for the FA Cup replay against Norwich and spoke about how he might change the team for the game.

He will be without Cesc Fabregas whom he reported has a minor hamstring problem. Gary Cahill is a doubt having come off during Saturday’s game. Conte said the captain’s muscular problem is not serious.

He also explained that Ross Barkley cannot play tomorrow as he did not sign before the midday Friday deadline to register players for the original third-round games, and therefore he remains ineligible for the replay. The midfielder could be involved in the weekend game at Brighton however.

Questioned about transfers, Conte pointed out he prefers to talk to the club rather than the media about those but asked directly if the club is trying to sign Alexis Sanchez from Arsenal, he replied:

He also responded to a suggestion that

Michy Batshuayi is close to moving away on loan.

‘But Michy Batshuayi is a Chelsea player and he is in our squad and tomorrow he has to play. He is having this possibility to show that he deserves to play for Chelsea. In the future, I don’t know what happens, also because the final decision is for the club, not for me.’

The boss did confirm he will be making many changes to his line-up for tomorrow’s game compared with the one against Leicester last time out, given the busy schedule and only two clear days after Norwich before we take on Brighton away in a lunchtime Premier League game.

He said the FA Cup replay is a good opportunity to give young players experience but emphasised it has to be the right young players.

On the bench for the first game against Norwich was Callum Hudson-Odoi, the Chelsea Academy player who was a key part of the England Under-17 team that recently won the World Cup for their age group.

‘We are talking about a player with good potential and I think he needs another step before having this opportunity to play a game with us,’ noted Conte, ‘but for sure he is a very interesting player for us and we have to continue to work with him to try to improve him, and have another step to be ready to face this type of game.’