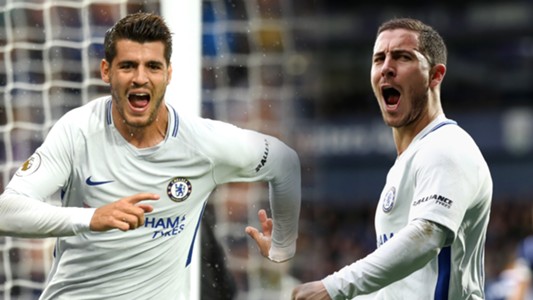 The duo combined to devastating effect on
Saturday, scoring three goals between them,
as Chelsea thrashed West Brom 4-0
Alvaro Morata and Eden Hazard showed on
Saturday that they are the key to Chelsea’s
hopes of success, not only this season but in
the years to come, as they ran riot against
West Brom at the Hawthorns.
West Brom have been the type of opponent
that Chelsea have struggled against this
campaign, but they were brutally put to the
sword. Long before half time, many fans had
already left the stadium such was Chelsea’s
dominance here.
Cesc Fabregas provided creativity from deep
and ran the midfield but it was Morata and
Hazard who were the undoubted stars of the
show. They scored three of the four goals
between them and combined brilliantly
throughout.
Hazard needed a few weeks after breaking
his ankle to get back to his best but he’s
now at his peak. A stunning dribble and shot
was parried into Morata’s path for the first
goal. Morata repaid the favour with a
beautiful backheel to Hazard, the Belgian
taking it around Ben Foster to make it 2-0.
Marcos Alonso made it 3-0 unmarked from a
free-kick and the under-fire Tony Pulis must
have been hoping that a Chelsea substitute
would throw one of their white shirts onto
the pitch to signal mercy.
Morata has proved to be a wonderful signing
since his £60 million move from Real Madrid.
It is hard to believe that he went through a
mini-goal drought after his hamstring injury
when you look at his statistics. He has eight
goals and four assists in his first 11 Premier
League games for the club and at 25 years
old, he’s still yet to reach his peak.
Meanwhile, Hazard showed why Chelsea are
desperate for him to agree a new contract
with two goals and deserved an assist for his
parried shot. A perfect first touch from a
long Fabregas ball gave Hazard all the time
in the world to beat Ben Foster to make it
4-0. Conte’s Chelsea have now won all
fifteen games that he scored in.
Chelsea have now moved to a 3-5-2
formation with Morata as the focal point and
Hazard playing off him in a free role. The
formation is only a slight variation on the
3-4-3 system that won the title last season.
This switch has been broadly successful as
Chelsea racked up high profile wins against
Atletico Madrid, Tottenham and Manchester
United but it leaves Pedro and Willian on the
bench. Hazard and Morata are in much better
form than their squad rivals and they will be
called upon in all of the biggest games.
Morata and Hazard even left the field with
bookings as they refused to show any
complacency despite the scoreline.
Chelsea now have 25 points and move above
Tottenham in the league. It took them 11
games to reach this points tally last season,
one less fixture than this year. But the real
difference is they are now competing with a
sensational Manchester City side, who won
again on Saturday to maintain their nine-point
lead over Conte’s men.
However, as long as Hazard and Morata stay
fit, it would be a surprise to not see Chelsea
win something this season. Chelsea’s
attacking duo showed they can do some real
damage to defenders, just as they did on
Saturday on the ground where they secured
the Premier League several months ago.