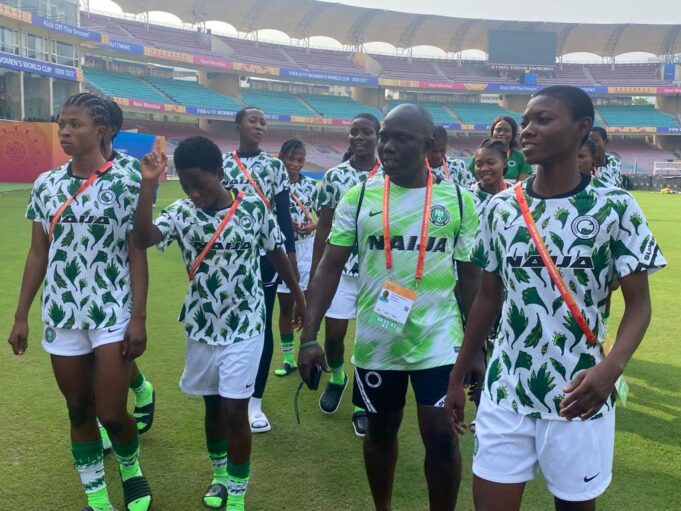 Colombia won the lottery of a penalty shootout after defender Comfort Folorunsho hit her kick against Luisa Agudelo in sudden death to send the South Americans into the final of the 7th FIFA U17 Women’s World Cup in India.

Both teams had battled to a grim scoreless draw in Goa on Wednesday evening and just like it happened against the United States on Friday, the Flamingos’ coaching crew had thrown in second choice goalie Linda Jiwuaku for the shootout and relieved the brilliant Faith Omilana.

Omilana virtually kept Nigeria in the tie with five big saves, with the Flamingos’ forward-line failing to create many chances. Big defender Mary Espitaleta rocked the crossbar from 23 yards in the 29th minute as the South Americans poured forward, and Omilana produced a crucial block to deny nifty captain Linda Caicedo with seven minutes left in the first period.

The inspiring Omilana foiled Caicedo severally in the second period, and penalties had to be applied to separate two teams looking for a spot in Sunday’s Championship Match.

Nigeria was a kick away from victory after Yesica Munoz saw her kick saved by Jiwuaku whilst Gabriela Rodriguez, Stefania Perlaza, Mary Espitaleta and Linda Caicedo scored for Colombia. Immaculata Offiong, Etim Edidiong, Miracle Usani and Taiwo Afolabi scored for Nigeria. But defender Omamuzo Edafe, who had scored Nigeria’s winner against USA in the quarter-finals, struck her kick against the upright.

Nigeria will play the loser of the second semi-final in Saturday’s bronze medal match.

I want to be the Next Oshoala, FUTA Tigress Star Reveals