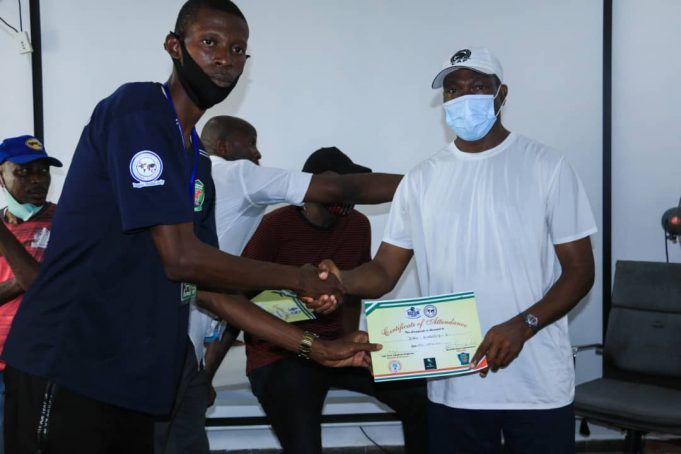 Coach Rabo Bello, one of the participants who received his certificate at the closing ceremony of the 5-Day clinic on Friday at the Lafia City Hall commended the organizers for the initiative which he said has widening their horizon about the dug-out dealings and will bear a positive impact on their players.

Rabo who also thanked the Nasarawa State Government for providing the enabling environment, expressed his delight at the privilege and opportunity to have learnt from all the resource persons who he said have been able to bequeath them with insightful contents.

In a remark, the Commissioner for Youth and Sports Development in Nasarawa State, Alhaji Othman Bala expressed belief that the programme would change the narrative of football development and lauded the leadership of Nationwide League One (NLO) for finding the state worthy of hosting the programme.

Bala congratulated all the 52 participants and charged them to transfer the knowledge acquired to their players believing that the technical delivery has afforded them a new knowledge about the game.

He further assured that the State Government under the leadership of Engr. Abdullahi Sule would continue to do it’s best in a bid for the state to take it’s righteous position in the scheme of sports development in the country.

“A seed has been sown today and I want to urge you (coaches) to please tender that seeds to blossom so that it will yield multiple fruits which in the next few years will bear impact on the society” the Commissioner said.

The Chairman Nationwide League One (NLO) Alhaji Mohammed Alkali who expressed his satisfaction about the programme which he said has been able to serve the yearnings of coaches in acquiring more knowledge through a simple mechanism.

Alkali who is also the chairman Nasarawa State Football Association and a Board Member of NFF noted that NLO partnership with the Berackiah/Abigol Football Coaching Clinic reflects the philosophy of the league in providing equal opportunities for teams and also cause a new wave of development in terms of putting the league on a sustainable path.

In their separate remarks, the CEO of Berackiah International, Mr Wonders Nwigwe and Coach Mathew Olorunleke appreciated the government of Nasarawa State for their overwhelming support towards the success of the clinic.

They also thanked the government for the warm reception and hospitality the team had enjoyed since they entered the State.

The former Technical Director of NFF, Coach Bitrus Bewarang urged the coaches to materialise all they have learnt in the clinic to practice, charging them to live up to expectations the clinic was meant to fulfil.

The train of the clinic has now covered the South-West, South-South, South-East and North-Central with Nigerian coaches benefiting from an in depth delivery of coaching education aimed at enhancing their capacity and competence.

Next on the clinic schedule is the North Western part of the country with Kano State as the programme centre.

The clinic will run from Monday 15th – 19th Friday at the Pyramid City.