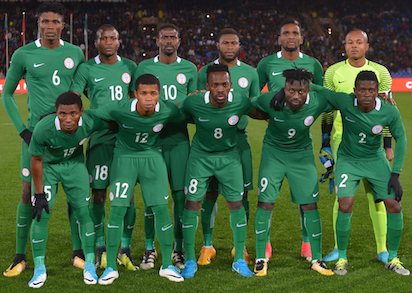 Super Eagles, ahead of today’s CAF African Nations Championship final against hosts Morocco are banking on the element of luck to see them through the game.

Depleted by injuries and suspension, the Super Eagles, according to captain Ikechukwu Ezenwa, are still hopeful of making Nigerians proud. Ezenwa is out of today’s game due to injury he sustained against Sudan in the semi-final. Other key players like Sunday Faleye, Daniel Itodo and Ifeanyi Ifeanyi are also out due to injury and suspension.

Also Emeka Atuloma, Stephen Eze and Dayo Ojo are on the mend and will be playing through pain

“By the grace of God we will make history,” Ezenwa enthused.

“It will be a thing of joy if we win. It is every player’s dream to win the trophy.”

The Super Eagles were the least prepared team for the tournament having spent most of their training time in Abuja and no quality friendly except that against Cameroon a few days before the start of the tournament.

That notwithstanding, the team rose up to the challenge winning their group and seeing off highly rated Angola and Sudan in the quarter-final and semi-final respectively.

And despite playing more than half an hour a man short, they managed the game well to book their place in the Final at the expense of Sudan, whose scalp included the impressive Zambia in the quarterfinal.

“We have shown great character to get to the Final,” coach Yusuf said.

“If things go on well. We can get a good result against Morocco.”
Www.vanguardngr.com