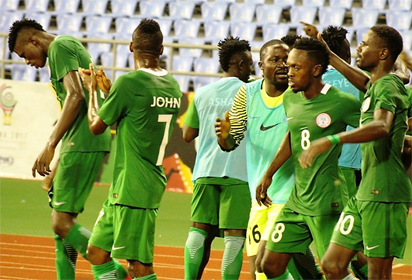 Nigeria’s Super Eagles team B on Friday, January 19 defeated Libya 1-0 in their second group C game at the ongoing 2018 CHAN tournament in Morocco.

Salisu Yusuf’s men went into this game knowing fully well that only a win will give them the guarantee of qualifying for the next round following their 0-0 draw against Rwanda in their first game.

Libya on the other hand were superb in their first game as they defeated Equatorial Guinea 3-0 in their own Group C opener.

Nigeria missed so many scoring chances in the first half as the trio of Sunday Faleye, Rabiu Ali and Anthony Okputu failed to find the back of the net.

Libya also got the chance to score before the first half break, but Nigeria would have goalkeeper Ikechukwu Ezenwa to thank as he was at his best to deny the Libyans.

Super Eagles changed their style in the second half as they supplied the Libyan defense with flurry of attacks, but they had to wait till the 79th minute before they got their goal.

Sunday Faleye who missed many chances in the first half finally redeemed himself as he scored the goal that condemned Libya to a 0-1 defeat.