The contingent of future Kings of Equitorial Guinea has arrived Nigeria ahead of the CAF confederations cup preliminary round 2nd leg tie against NPFL club side Rivers United.

The contingent which consists of 20 players and 10 officials landed at the Port Harcourt international airport around noon yesterday. According to Rivers United media officer Mr Mayuku Charles.

The team will be brimming with lots of confidence after gaining a 2-1 home victory in the 1st leg In Equitorial Guinea and will be looking at Finishing the job and qualifying to the next round by getting a favorable results. 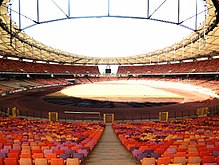