Hassan Haddi’s first one minute goal helped Ablaze Football Academy secure a vital away win seeing the Blazers end Bethel excellent run in front of their fans,a team who are on their 10th game unbeaten run with as low as 6 goals in every game.

The home side were very technical and precised with every of their move,and always dangerous when the ball is at their feet. However Tunde’s brilliance and Rotimi’s exceptional vital saves made the win much more deserved.

Ablaze started with a 4-3-3 formation, Rotimi at the goalpost defended by a solid back 4 of James and Mark alongside Tosin and Joseph, two defensive midfielder Yemi and Tunde played behind Ben,while a front three of Haddi,Sunday and Sheriff helped the attack.

The blazers scored at their first attack in the first few seconds,as Tosin took the ball down the right flank and whipped in an excellent cross to the second post which Haddi bundled into the net at the far post.

Both side dominated the game and tried to get a goal with Fc Bethel hungry for the equalizer and going for the kill but Tunde was in his good moment as he made great interception and accurate tackles while Rotimi gave his best goalkeeper performance keeping the goal at 0-1 for the Blazers.

The game ended with Ablaze Football Academy giving the shocker, Tunde gave an excellent performance with Passes, interceptions, marking been accurate, surprising everyone helping the team on their second game without conceding a goal also with a 4 games unbeaten,all away from home scoring 9 and conceding 3. 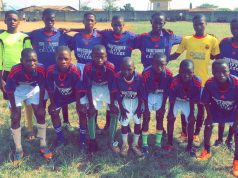 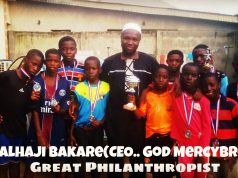