It was another day for the Blazers U13 as they
went on to take Circle Range FA on a ride with
the Blazers coaches having difficulties with
selection problem due to the top form each
player have been.

Key players like Emmanuel, Abbey, Al-
Amin,Agoro,Mohammed,Kehinde and more were
on the bench while the starting 11 were also a
force to reckon with as the blazers operated on
a 4-3-3 formation.

Emmanuel started at goalpost as usual while
Kehinde paired Samuel in central defense for
Aboy and Quam to play right and left back, Taye
handled the defensive midfield behind Bodunde
and Kingsley as Taye was supported by Ope and
Basit upfront.

The kids started up brightly mounting the first
attack and missing two chances to take the lead
before Basit fine switch found Ope who slammed
a right footed shot to the far corner of the net to
make it 1-0, Basit well taken free kick struck the
top bar before landing at Ope’s foot who curled
the shot wide.

The first half ended on a 1-0 note but the second
half saw more drive as Basit grabbed the second
goal after a beautiful pass from Bodunde found
Basit who paced the ball into the 18yard box,the
keeper saved the initial shot before Basit struck
the rebounds to make it 2-0.
Mohammed made his third appearance for
Ablaze as he came in for Quam to switch the
game to 3-4-3,Kehinde also came in alongside
Emmanuel for Basit and Bodunde while Al-Amin
came in for Taye.

A good play between the blazers in two touches
passes saw a switch of play by Kehinde to wing
back Emmanuel, he dribbled pass one defender
then struck in a one time ball for Kehinde to open
his goal account with Ablaze Football Academy.

Circle Range got a late consolation after Amin
lost the ball in the midfield and the blazers were
hit on a counter.
It was a game to see how the kids are
developing together as s team and its working
fine with the blazers having enough options on
the bench. Ariko Samuel gave an excellent
performance as the young right back who was
deployed as a CB gave a classic performance
with good composure and coordination from the
defense. 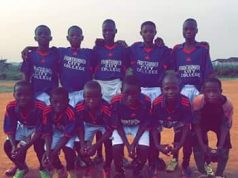