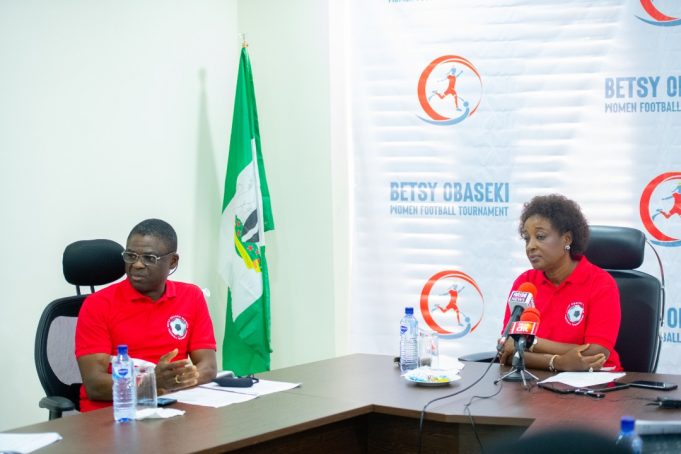 The Edo First Lady gave the commendation on Tuesday at the University of Benin Sports Complex during the game between Edo Queens and Rolly FC Queens she watched.

Mrs Obaseki ascribed the realisation and progress made so far in the ongoing Betsy Obaseki Women Football Tournament in Benin City to the Deputy Governor,noting that comrade Philip Shaibu is the chief designer of the women football preseason tournament.

The first lady said:” My husband is very wise. I now know why he handed over everything about Youth and sports to his Deputy. Without him this tournament would not be happening. ”

The visibly happy Edo first lady moved round the two venues where games of the Tournament named after her were played.

At the Western Boys High School ground,the first lady in company of the Deputy Governor watched FC Robo of Lagos versus Fortress Ladies of Benin which Robo won 5-0 with all 5 goals scored by Super Falcons sensation Gift Monday.

Meanwhile, it was a bumper goals harvest for some participants in the day two of the ongoing Betsy Obaseki Women Football Tournament as Super Falcons striker Monday Gift
scored five times against Fortress Ladies to seal semifinals place.

The last group Matches have been scheduled for Thursday after Wednesday rest for the participanting clubs,except Sunshine v Kada Queens day one fixture rescheduled to hold Wednesday at the Uniben sports Complex. The match day one fixture could not hold on Monday following delayed arrival of Kada Queens. Time for the Rescheduled game is 10:00AM.