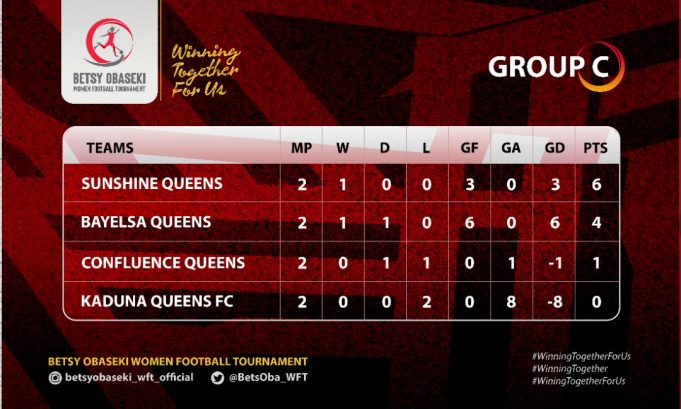 The First edition of the Betsy Obaseki Women Football Tournament going on in the Edo State capital, Benin City, is living to expectations as top Nigeria Women Premiership clubs are in photo finish to get the four a available places in the semi finals of the tournament as the group games ends today at the University of Benin Sports complex, Ugbowo campus and the Western Boys High School, Ikpoba Hill.

The battles for the four semi finals places will be fierce in in three matches: Edo Queens versus Heartland Queens, Rivers Angels versus FC Robo Queens and the cracker between Bayelsa Queens and Sunshine Queens.

In Group A, Edo Queens on six points and +5 Goal Difference, must beat or play a draw against Heartland Queens of Owerri in their last group game scheduled for the Uniben Sports Complex at 1pm. If Edo Queens fail to beat Heartland to move to 9 points, the narative will change if the Owerri team wins the game with just a lone goal. This will take Heartland to seven points from their present 4 points. Heartland Queens need just a simple win to play in the semi finals.

The toughest game is in Group B, as Rivers Angels of Port Harcourt slug it out against FC Robo Queens of Lagos at the Uniben Sports Complex in the first match of the day at 10am.
The two Premiership clubs going into the final group game are tied on six points, with Robo topping the table with a +10 Goal Difference against Rivers Angels’ +7 inferior Goals Difference. A win or draw for any of the two will separate them. What that means is that, any of the teams that win today’s game, move straight to the semis. A draw will favour FC Robo more to book a semis’ ticket looking at their superior Goal Difference.

These two teams are also the best candidates for the single slot for the best losers of the group stages going by their equal 6 points and superior goals in two matches in all the three groups.
In Group C, Sunshine Queens of Akure must defeat or play a draw against the hard fighting multiple Premiership League champions and current Aiteo Cup champions. With at least a lone goal to take them to 9points. A draw for Sunshine Queens will still give them a superior seven points. The Restoration Girls from Bayelsa must beat ‘The Betty Babes’ with at least one goal to take them to superior seven points, making their superior +6 Goal Difference immaterial. Sunshine Queens have +3 Goal Difference.

The semi finals of the Betsy Obaseki Women Football Tournament hold on Saturday at the Samuel Ogbemudia Stadium, while the Grand final and Third place matches hold on Sunday, October 3 at 5pm, this will be heralded by the closing ceremony at 4pm at same venue.