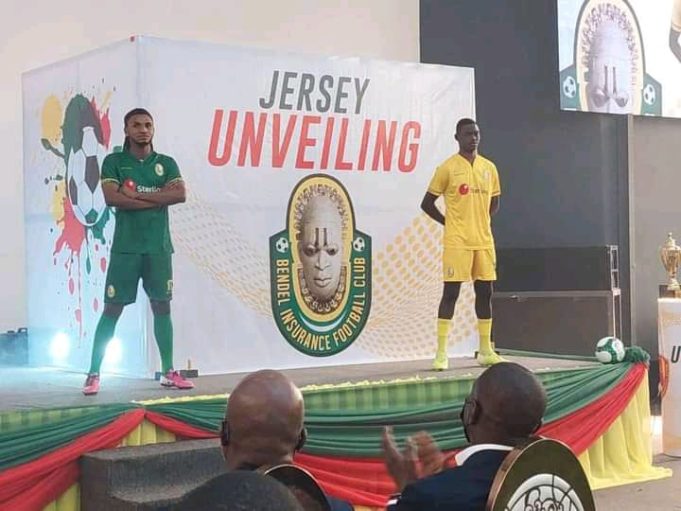 Management of Bendel Insurance FC and Edo Queens FC Tuesday, February 8th took the world by storm as they unveil new kits and sponsorship deal for the state’s sponsored teams.

The jerseys will be worn for the first time by the men’s team Bendel Insurance FC on Friday, February 11 when they face Vandrezzer FC in the opening week of the new NNL season.

In the event graced by creme de la creme in Nigerian football, government officials and business moguls, the management of the clubs unveiled Sterling Bank Plc as shirt sponsors for Bendel Insurance in a one year deal worth 50 million naira.

In his remarks, Edo State Governor, Mr Godwin Obaseki, said his administration’s vision to reform sports is aimed at creating jobs and curbing restiveness among youths.

The Governor, alongside his Deputy, Rt Hon Comrade Philp Shaibu and the Chairman of Bendel Insurance shirt sponsors, Sterling Bank, Asuen Ighodaro unveiled the new jersey of Bendel Insurance FC of Benin, while Her Excellency, wife of the Governor of Edo State, Mrs Betsy Obaseki alongside, Her Excellency, wife of the Deputy Governor, Comrade Maryann Philip-Shaibu unveiled the Edo Queens FC jersey which has the legendary Queen Idia mask as the main attraction.

According to Obaseki, “We have a keen interest to reform the sports sector in the state, and this is aimed at providing solutions to youth restiveness and unemployment. For us, sports have the potential to uplift the lives of our people and offer hope to youths who seek a better country.

Edo people are sports-loving. We will leverage this as we continue our reforms and give hope to our teeming youths. The steps made in reforming the Bendel Insurance FC will serve as a reference point to drive more reforms in the sector while appreciating the chairman of Sterling Bank Plc.

The Deputy Governor, Rt, Hon. Comrade Philip Shaibu, on his part, hailed the achievements of the club, which has a reputation for producing top stars for the national team, while highlighting the success stories and optimism ahead of the season.

Shaibu added, “The decision to unveil the Bendel Insurance FC and Edo Queens new jerseys is to ensure that the club remains a force to contend with”.

In her address, Edo State Sports Coordinator, Mrs Sabina Chikere acknowledged the immense contribution of the state government towards sports development, adding that the two teams are now positioned to take the world by storm.

“In partnership with Sterling Bank, Edo State Government has unveiled the Edo Queens and Bendel Insurance FC home kit for the season which challenges the orthodox surrounding the club’s traditional style.

The shirt, which has a collegiate yellow body and red/green stripes on the shoulders and sleeves, capped off by its traditional yellow shorts and socks will be used for their home matches respectively, while the jersey with pepper red/green body with stripes yellow on the shoulder, capped off by red/green shorts and socks with yellow stripes will be for their away matches for the new season.

Manufacturers, 14 Fourteen.com say that the strip, modelled by stars Tanimu Benjamin, Oshoke, Suliat Abideen and Yemisi Samuel, jerseys boasts a more vibrant colour that boosts their performance when they are playing.

“We give attention to the details by developing a new shape of colour and include in the pattern, the symbol of Edo State. We also created the leopard design on the Edo Queens jersey and camouflage on the Bendel Insurance’s.”