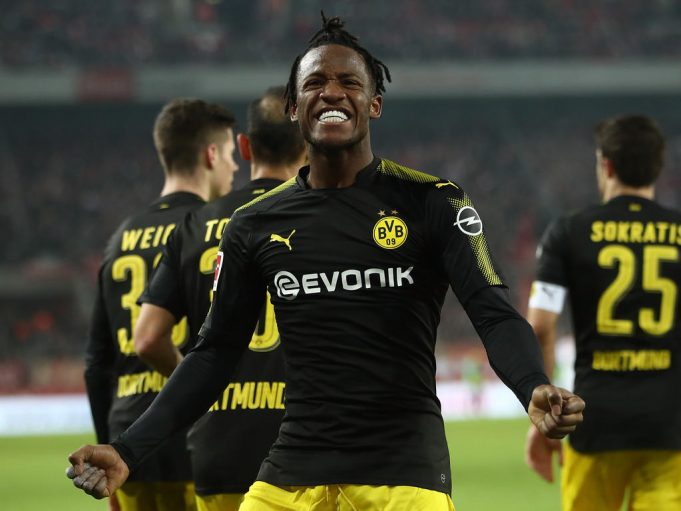 Michy Batshuayi scored twice on his Borussia Dortmund debut in Friday’s 3-2 Bundesliga win at bottom side Cologne — just two days after signing on loan from Chelsea.

Head coach Peter Stoeger, who was sacked by Cologne in December, threw the Belgian striker in at the deep end to replace Pierre-Emerick Aubameyang.

Dortmund sold their top-scorer to Arsenal for £56 million ($79 million, 63 million euros), then signed Batshuayi hours later as cover until May.

“I am very happy, but the most important thing was the win,” Batshuayi told Eurosport.

“It’s my first match, it was always going to be difficult, so I am really happy we got the three points.”

Having already scored 12 goals for Chelsea this season, Batshuayi scored 35 minutes into his Bundesliga debut when he fired home a cross.

Cologne equalised with an hour gone, but the 24-year-old Batshuayi showed ice-cool finishing to restore the lead less than two minutes later.

He could have finished with a hat-trick having put the ball in the net just before the break, but the video assistant referee (VAR) spotted he was offside.

Cologne levelled for the second time when Jorge Mere headed home, but Batshuayi provided the final pass for Andre Schuerrle to hit the winner.

It lifts them to second in the table, level on 34 points with Bayer Leverkusen and Schalke who play Saturday, behind leaders Bayern Munich.

Batshuayi grabbed his first goal when Dortmund left-back Jeremy Toljan fired a cross into the box for the Belgian striker to fire home.

The pair combined again just before the break when Batshuayi again tapped home, but the goal was ruled offside by the VAR.

It was 1-0 at the break, but Cologne drew level on 60 minutes when second-half replacement midfielder Simon Zoller finished off a counter-attack.

Cologne equalised again on 69 minutes when Mere headed home from a corner.

Shuerrle claimed his first league goal for 11 months when Batshuayi spotted the Germany winger free on the right and he smashed home the winner.

Swiss centre-back Manuel Akanji, who cost 21.5 million euros ($26.4 million) from Basel last month, made his Dortmund debut in the dying stages off the bench.

Pep: Congrats to Sanchez and United